A refugee camp of shattered lives as Kurds flee to Iraq

‘All the countries betrayed us...How could they leave us? We are like the sheep without a shepherd. They fed us to the wolves’ 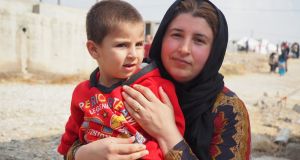 Gulistan Hawas Saado with her son Ahmad. “In history nobody has ever been a friend to the Kurdish people.” Photograph: Lorraine Mallinder

Gulistan Hawas Saado is sitting on the concrete bricks outside her tent, cradling her sleeping son. She arrived in Iraq’s Kurdistan region last Thursday after a perilous journey with her husband and five children from the town of Al-Darbasiyah in northeast Syria.

It cost $1,000, all their life savings, to flee the Syrian war’s new frontline on the border with Turkey. Dependent on what she describes as a “spider’s web” of drivers and smugglers, they had pushed blindly through the confusion of an eight-year civil war that has recently taken yet another deadly turn.

Turkey invaded with Syrian rebel proxies two weeks ago, shattering the fragile peace in their Kurdish-run enclave. That territory was hard-won, carved out by the Kurdish-led Syrian Democratic Forces (SDF), the boots on the ground clearing the region of Islamic State jihadis after US air strikes. With the US on their side some had allowed themselves to believe that their dream of a homeland might come true.

Not Gulistan. She never believed in the dream of Rojava, the name Syrian Kurds give their would-be state. “In history nobody has ever been a friend to the Kurdish people,” she shrugs.

So it came as no surprise to her when the US stepped aside to let Turkey, wary of the SDF’s links to Kurdish militants who have waged a four-decade insurgency on its soil, bomb the dream.

The invasion was billed as a means of creating a “safe zone” where two million refugees in Turkey, mainly from Sunni Arab areas in western Syria, could be resettled. A recipe for ethnic conflict for years to come, that will keep Kurds out of the border region.

Left on their own to face the Turkish onslaught, spearheaded by ragtag opposition militias whose vengeful ranks include Islamist extremists, the Kurds had no choice but to turn to the Russian-backed regime of tyrant Bashar al-Assad.

Navigating the shifting alliances, Gulistan and her family found themselves in the city of Al-Hasakah, where rumours of an Islamic State comeback swirled. As the situation spiralled, five jihadis had escaped from a prison in Qamishli in the northeast. A car bomb attack in Qamishli, claimed by Islamic State, sparked fears of sleeper cells reactivating.

Shortly after hundreds of relatives of Islamic State fighters fled Ain Issa detention camp to the west. Lying awake at night, Gulistan and her husband decided to head for Iraq.

No friend but the mountains. Zafi Mohamed Ali (61) tells a story that seems to sum up that old saying about the Kurdish people in the most brutal way. She and her husband had lived a quiet life in the northwestern city of Afrin all their lives. Their existence was blown apart in 2013 when their son-in-law was beheaded near the port city of Tartus.

She suspects that the “Shabiha”, ultra-violent enforcers of the Assad regime set up at the beginning of the 2011 uprising, were responsible. His brother, who witnessed the killing, later described the steroid-pumped, muscular physiques typical of the militia’s members. He went blind with the trauma.

In 2018, Zafi and her husband fled Afrin when Turkey launched Operation Olive Branch. The two-month offensive, aimed at clearing the city of Kurdish militias, was a foretaste of what was to come, with Syrian rebel groups taking control, sending more than 100,000 fleeing. This year a UN commission of inquiry reported kidnappings, abductions, torture, extortion and assassinations.

The pair fled to Kobane, a city that achieved mythical status after Kurdish fighters won an epic battle against Islamic State, also known as Isis, or Daesh, in 2015. Known as the Kurdish Stalingrad, it marked a turning point in the war against the terror group, initiating the partnership between the Kurds and the US.

But when Turkey launched its offensive this month, the writing was on the wall. Zafi and her husband made for Iraq, just before the city fell back to Damascus.

“What is this life? At this age I’ve fled my home, and now I have to start a new life.” says Zafi’s husband Mohamed Rasheed Khaleel. The 66-year-old is heartbroken that he had to leave behind his olive farm in Afrin. “There is no place for weak people in this world. The only ones who have luck are the bad people. I don’t believe in anything anymore.”

In another tent a group of men in their late teens recline on mattresses, listening to an older man, who sits cross-legged, smoking a cigarette, tipping the ash into an empty water bottle. They recently arrived from a village near the northeastern town of Derik. In the days before they left the young men had kept a low profile, avoiding checkpoints in case they were called up to do military service for Assad’s army.

“The deal between the SDF and Assad is failure itself,” says the older man, Ousama Kamal Ali, a 32-year-old construction worker. “The problem is that Assad and Erdogan are both terrible. Assad has massacred, kidnapped, burned people.”

Ousama had truly believed. “One hundred per cent,” he says. “Now it’s minus one hundred per cent. We can’t solve all this. It’s a big game between the strongest. I could go back. I would die. And if I didn’t die, I don’t even know if I’d get my house back.”

He has been telling his younger friends they should head for Europe. “They’re young. They still have a future.”

What about his future?

He looks me straight in the eye. “The only thing I want is for our kids not to see blood.”

He recounts how his nine-year-old daughter had seen a video of a young boy covered in chemical burns at a hospital in Tal Tamr, near the battleground city of Ras al-Ain, that has recently been circulating on social media. Experts have said the burns are consistent with use of white phosphorus. In the video the boy screams for his father to stop the burning.

Like everyone else Ousama and his friends are still trying to work out why all this is happening, how the world can stand by and allow this to happen.

“All the countries betrayed us. They sold us cheaply. After we gave 11,000 martyrs in the fight against Daesh. How could they leave us? We are like the sheep without a shepherd. They fed us to the wolves.”