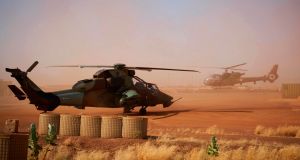 A Tigre helicopter at a French military base in Gao, northern Mali, on November 8th, 2019. Photograph: AFP via Getty Images

The incident occurred near the borders of Mali, Niger and Burkina Faso, and claimed the lives of soldiers from four regiments.

Acting on intelligence information, paratroop commandos on the ground had pursued jihadists in a pick-up truck and on motorcycles. A firefight ensued and the paratroopers called in air support, Gen François Lecointre, chief-of-staff of the armed forces, told journalists.

The helicopters, a Tigre and a Cougar, arrived rapidly in total darkness and collided. The commandos on the ground heard two explosions. All on board died.

President Emmanuel Macron expressed his “profound sadness” over the deaths “during a combat operation against jihadists”.

In a communique issued by the Élysée, Mr Macron said he “salutes with greatest respect the memory of these army soldiers, six officers, six non-commissioned officers and a corporal...who died for France in the difficult battle against terrorism in the Sahel”.

Mr Macron offered his sympathies to the soldiers’ families and loved ones, and assured them of “the permanent solidarity of the nation”.

A memorial ceremony will be held at Les Invalides in coming days.

One of the dead soldiers, Lieut Pierre Bockel, was the son of the centrist senator and former cabinet minister Jean-Marie Bockel.

A minute’s silence was observed in the National Assembly, where prime minister Edouard Philippe saluted “these heroes who died for their country”, saying “we owe them infinite gratitude”.

“This terrible news plunges our armed forces, the defence community and all France into mourning,” defence minister Florence Parly said in a statement.

An investigation has been opened to determine the exact circumstances of the crash, she said.

The deaths bring to 41 the number of French soldiers killed in Mali since Operation Serval, subsequently renamed Barkhane, began in 2013. About 4,500 French soldiers are fighting the Islamic State in the Greater Sahara (ISGS) and Al Qaeda in the Magreb (AQMI). There is little or no Malian central government authority.

Losses in the helicopter crash are believed to be the heaviest since 58 French soldiers were killed in a suicide attack on the Drakar building where French paratroopers were billeted in Beirut in 1983.

French experts say that some African states would have collapsed if France had not intervened and remained in the Sahel region. Yet despite French and UN intervention, the jihadist presence is growing. Attacks increase with the dry season, which is starting.

Fourteen Irish soldiers from the Army Rangers Wing began arriving in Mali in September to serve with the 15,000-strong UN force Minusma. About 200 blue helmets have been killed with Minusma, making it the most dangerous UN mission.

For months fighting has centred in the Liptako region, where the crash occurred. On November 1st, ISGS attacked a military base at Indelimane, killing 49 Malian soldiers. The following day French soldier Ronan Pointeau was killed by an explosive devise that targeted a logistics convoy.