Foyle: No election pacts in Derry where battle is within nationalism 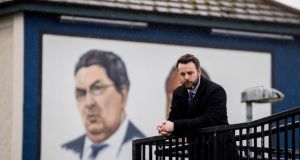 SDLP leader Colum Eastwood: “There will be a vote, or votes, in Westminster, and it’s whether you want somebody who will go to Westminster and use their voice or somebody who won’t.” Photograph: Liam McBurney/PA Wire

When the Westminster election result was declared in Foyle in 2017, much metaphorical use was made of the unbreached historic walls around the city of Derry.

The defeat of Mark Durkan, the MP of 12 years’ standing, and the capture by Sinn Féin of the city synonymous with John Hume and the SDLP marked the end of a results’ night during which the party lost its three MPs and, therefore, its entire representation at Westminster. The SDLP’s walls had been stormed; its stronghold had fallen.

Some 2½ years on, and it is the party leader, Colum Eastwood, who is attempting to recapture the city from the outgoing MP, Sinn Féin’s Elisha McCallion.

There have been no election pacts here; in Foyle the battle is within nationalism. In this Border city it is a two-horse race between McCallion and Eastwood.

With only 169 votes separating them last time around, it requires no great political insight to deduce this will be a close contest.

Yet much has changed since June 2017. Just as the uncertainty around Brexit has intensified, so too has the frustration and worry felt in a city with long-standing economic, social and family ties to Donegal.

The question in Foyle is not about Remain versus Leave; here the choice, as pitched by the SDLP, is between a Remainer who will take their seat at Westminster and one who will not.

Eastwood’s election literature lays it out. The alternative to voting SDLP is “a Brexit where the only Derry voice is Gregory Campbell’s,” it reads, referring to the DUP MP.

“There are a thousand issues I could talk about,” says Eastwood, “but they’re all affected by Brexit. There will be a vote, or votes, in Westminster, and it’s whether you want somebody who will go to Westminster and use their voice or somebody who won’t. That’s really about the height of it.”

Sinn Féin don’t buy it – a “weak argument” is how McCallion puts it.

“People I think have realised, even beyond republicans, nationalists broadly have realised that their arguments won’t be served there [in the House of Commons].”

McCallion’s pitch is firmly local. A huge banner, erected in the city centre on the side of Derry’s main theatre, the Millennium Forum, as it hosted the party’s ardfheis earlier this month, proclaimed: “My allegiance is to Ireland. My pledge is to fight 4 Derry”.

Publicly the Sinn Féin mood was confident; the party’s Northern leader Michelle O’Neill spoke of building on its current “magnificent seven” MPs come December 12th, though the high profile given to McCallion during the conference and the “I’m voting Elisha” T-shirts sported by Martina Anderson MEP and others spoke of an awareness that their candidate faces, in her own words, a “tight fight”.

The 2017 election came at a good time for the party. McCallion’s victory was the crest of a Sinn Féin wave which had been building since the resignation of the late Martin McGuinness as deputy first minister that January as the fallout over the Renewable Heat Initiative scandal spiralled into a crisis which, in nationalist eyes, had at its core a continued lack of respect for their identity.

The subsequent Assembly elections, on March 2nd, reversed the long-standing trend of falling turnout – up 10 per cent across Northern Ireland compared to elections held in very different circumstances less than 12 months previously – and took Sinn Féin to within a hair’s breadth of replacing the DUP as the largest party.

A few months later and Northern Ireland was back at the polls again in June 2017 for a general election. Both the turnout and the Sinn Féin vote were up, again thanks to an electorate further galvanised by both the death of McGuinness on March 21st and a now infamous remark about crocodiles by the DUP leader Arlene Foster. She had said “if you feed a crocodile it will keep coming back and looking for more”,in relation to Sinn Féin’s demand for an Irish Language Act.

The “McGuinness effect” undoubtedly boosted McCallion in their shared home town of Derry. Behind the scenes it is acknowledged that the party cannot rely on that this time.

Similarly, as Northern Ireland approaches three years without a devolved government it is stagnation rather than momentum which characterises the North’s politics.

Locally there have been warning signs that the Sinn Féin advance is stuttering. In the council elections in May the party lost five seats and its overall position as the largest party on Derry City and Strabane District Council; the SDLP gained three to put the parties on 11 each.

By this count there is all to play for. There are many unknowns, not least the candidacy of retired GP Anne McCloskey, Aontú’s only councillor in the North, who will draw pro-life voters away from both parties but may, on balance, do more damage to the SDLP.

However, Eastwood is likely to pick up some votes from pro-Remain unionists, though again the extent of this is another variable.

Traditionally Durkan attracted a degree of support from unionists who felt that an SDLP MP was preferable to one from Sinn Féin. While Eastwood’s nationalist convictions are viewed as being of a deeper green than Durkan’s, the desire to defeat McCallion and to have a pro-Remain voice in Westminster will lead some unionist voters to place their X in Eastwood’s box.

In a contest as close as this even the weather on polling day could make a difference, and there is much speculation as to who would lose out most if a bad night keeps voters at home.

In this contest within nationalism the battle lines are firmly drawn on Derry’s walls; this time it may be Eastwood who edges it.