In a BBC interview Jeremy Corbyn repeatedly refused to apologise to the British Jewish community over anti-Semitism claims. It followed Britain's chief rabbi saying Corbyn was unfit to be PM for failing to stem anti-Semitism within his party. 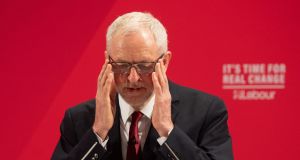 Jeremy Corbyn at the launch of the Labour Party’s race and faith manifesto at the Bernie Grant Arts Centre, London, on Tuesday. Photograph: Joe Giddens/PA Wire

This morning’s front pages make dismal reading for Jeremy Corbyn, as almost every paper leads with his disastrous BBC interview last night with Andrew Neil. Those most ideologically hostile to Labour are, as you might expect, the most unsparing, with the Daily Mail’s headline “Torn Apart” taking up most of its front page, the Express asking “Has Corbyn’s horror show gifted Boris the keys to No 10?” and the Sun describing the interview as “shameful”.

The Times and the Telegraph lead on Corbyn’s refusal to apologise to Britain’s Jews and the Guardian’s headline says “Corbyn struggles to rebuff anti-Semitism accusations”. You can read my report here and my analysis here.

BBC news leads this morning with a different aspect of the interview, when Neil pressed Corbyn into acknowledging that some of his tax plans would hit lower earners. Labour has promised that tax increases will only affect those on more than £80,000 a year – the top 5 per cent of earners.

But the party has also pledged to abolish the marriage tax allowance, which can save couples on lower incomes £250 a year, on the basis that is discriminates against single people. And Labour’s plan to tax capital gains at the same level as income could hit people who depend on private pensions, even if their earnings from dividends are low.

Corbyn will today try to move the campaign’s focus back to the National Health Service (NHS) with a statement in London this morning and he will be talking about climate change during campaign stops in the south-west of England later.

A YouGov poll of Welsh voters points to a dramatic recovery for Labour, who are now 6 points ahead of the Conservatives in Wales.

Until this week, Labour was winning the battle to dominate the news agenda with issues such as health, education and funding public services rather than Brexit. The latest focus on anti-Semitism has the potential to halt the party’s upward momentum as voters look more closely at Corbyn’s qualities as a leader rather than the policies he advocates.

Rachel Shabi in the Guardian laments how antisemitism has become a partisan issue.

Daniel Finkelstein warns the Conservative electoral strategy will come at a price.

10am Jeremy Corbyn makes a statement on the NHS