Nigel Farage, one of the leaders of a campaign for the UK to leave the EU, has launched a new Brexit Party, accusing MPs of betraying Britain's decision to quit the bloc. 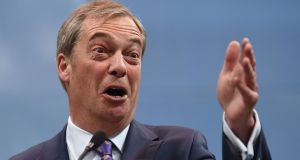 The sister of Tory Brexiteer Jacob Rees-Mogg is to stand as a candidate for Nigel Farage’s new Brexit Party in the forthcoming European elections.

Annunziata Rees-Mogg was introduced by the former Ukip leader at the party’s campaign launch at a factory in Coventry.

Addressing cheering supporters, Ms Rees-Mogg said it was not a decision she had taken lightly after years loyally supporting the Tories.

“I joined the Conservative Party in 1984 and this is not a decision I have made lightly — to leave a party for which I have fought at every election since 1987, from Maggie Thatcher through to Theresa May.

“I know which one I’d rather have representing us now.”

She added: “The point at which our prime minister will not listen, not only to her membership, but will not listen to the people of her country... I can’t sit by and let her do it.

“We’ve got to rescue our democracy, we have got to show that the people of this country have a say in how we are run.

“That the politicians are not our masters — they are to do our bidding.”

In his launch speech, Mr Farage said the campaign marked the start of a fightback against a political class which had betrayed the Brexit referendum result.

“I do believe that we can win these European elections and that we can again start to put the fear of God into our Members of Parliament in Westminster,” he said.

“They deserve nothing less than that after the way they’ve treated us over this betrayal.

“Our task and our mission is to change politics for good.

“I said that if I ever did come back into the political fray, next time it would be no more Mr Nice Guy and I mean it. I am angry about what has happened.

He said the current political leadership had proved to be weak and “pretty incompetent”.

“All over the world, people look on with incredulity because they still think that we are a great country,” he said.

“But our leaders are happy to continue down the path of managed decline. I genuinely believe, right now, this nation, we are lions led by donkeys.”

He said he had been “astonished by the quality” of people who had put themselves forward to stand as Brexit Party candidates.

He said “thousands” had applied to stand in future local and Westminster elections and 70 had been selected to fight the European Parliament polls on May 23.

The campaign launch will intensify the pressure on Mrs May, with many Tories fearing they will haemorrhage votes to the new party amid growing frustration with the deadlock in parliament.

However, Mr Farage’s rhetoric alarmed some at Westminster at a time when MPs have reported growing numbers of personal threats in the highly charged atmosphere over Brexit.

Labour MP Stephen Kinnock tweeted: “You preach fear, hatred and division, Nigel. But the vast majority of the British people are crying out for a politics of hope, respect and community.