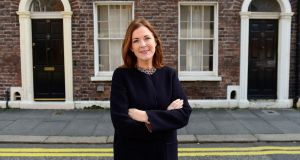 Angela McGowan, the CBI’s regional director for Northern Ireland: “The type of Brexit that Brexiteers are pursuing has never been adequately defined.” Photograph: Pacemaker

“Pandora’s Box has been opened and people want something,” says Angela McGowan, the Confederation of British Industry’s (CBI) regional director for Northern Ireland.

She’s talking about Brexit and the possibility of it being reversed, which she thinks is now unlikely. “Whatever happens it’s not going to be what we had in the past,” McGowan says as we meet in Belfast, a little more than 36 hours before the European Union once again agreed to extend the Brexit deadline, this time until October.

The former Dankse Bank chief economist turned lobbyist for Northern Ireland’s business community believes the dark forces it has unleashed won’t just disappear and may yet trigger the break-up of the UK itself, a scenario that creates all sorts of uncertainty in Northern Ireland.

McGowan has been pulling her hair out for months at the twists and turns of this most protracted of political divorces, at the endless Westminster paralysis, and at how Northern Ireland’s economic prosperity has been forsaken in all this.

The CBI’s official position is that it wants the UK to remain in some sort of customs arrangement with the EU while maintaining regulatory alignment and forging some sort of bespoke deal on services, which accounts for 70 per cent of the UK and the North’s economy.

But wouldn’t this render the last three years of wrangling, the entire Brexit process, pointless in the extreme, as the UK would be retaining most of what it already has albeit without a seat at the decision-making table, and all that just to end free movement. “We are where we are,” McGowan shrugs.

When she was with Danske she warned the UK was “sleepwalking” into Brexit and that people “were not fully informed” about its implications. Three years on and little has changed. She believes about half the UK cabinet are not even fully aware of the consequences of a no-deal scenario.

“The economic analysis hasn’t been what it should have been. There wasn’t any proper modelling done around the impact of the various trade scenarios,” she says. “The difficulty all along has been that the type of Brexit that Brexiteers are pursuing has never been adequately defined.

“Some are advocating this whole free-market approach competing with the rest of the world, which is the complete opposite of the protectionist, bring-up-the-borders stance of others.”

The UK government estimates the cost to Northern Ireland of a hard Brexit with World Trade Organisation tariffs would be €5 billion over 15 years, equating to 12 per cent of the North’s gross domestic product (GDP). The squeeze would come through lost investment, higher inflation, which dampens consumer demand, and lower exports, 57 per cent of which go to the EU.

But McGowan believes this is an underestimate as it fails to take into account the impact of a hard Border with the Republic, which is likely to impede trade and tourism. Currently some 34 per cent of the goods and services that the North exports go to the Republic, while more than 70 per cent of its international tourists arrive via the south.

The UK government’s estimate, she says, also fails to take into account the potential loss of EU migrant workers, a vital source of labour for Northern Ireland, which will pull GDP back a further 5 per cent by 2041.

Prior to the referendum, migrants made up about 7.7 per cent of the North’s workforce. That fell to 6.6 per cent “in just one year” after the vote, says McGowan. The 2018 figure isn’t yet available.

It indicated that businesses in the North axed jobs at their fastest rate in six years while new export orders won by companies plummeted.

Before the referendum, Northern Ireland was on the up, McGowan says. Belfast had hosted the MTV Music Awards and Rory McIlroy’s golfing exploits had put the North on a global stage. Perhaps most significantly of all, it had been promised a lower rate of corporation tax by David Cameron’s government to bring it more in line with the Republic.

“We’d only got back on our feet from the financial crisis and we were thrown into this Brexit uncertainty, which has stalled things for the economy.”

What’s unquantifiable in calculating the Brexit drag are the lost opportunities, the investments that might have been, she says, noting there have been no big job announcements since the vote.

US investment bank Citi announced a major investment in Belfast, creating 600 additional jobs in 2014 in the run up to the referendum. Since then, the announcements have dried up.

McGowan (49) grew up in Belfast, but now lives in Hollywood, Co Down, also home to Rory McIlroy. Her husband, Peter, is a Dubliner and also an economist and works for the Central Bank in Dublin. They have two sons, Dermot and Rory.

Economics has been a passion since school, where a charismatic teacher, George McConnell from the Belfast Royal Academy, inspired her interest.

She began her career as a research associate in the economics department of Queen’s University Belfast before going on to work for the Northern Ireland Economic Council, now merged with the Economic Research Institute, a policy-oriented think tank not unlike the ESRI in the Republic.

After eight years working as the chief economist for Danske Bank, she joined the CBI in 2017 as its regional director for Northern Ireland. “Although I could see the referendum result was going to place huge strain on the CBI director role for the next couple of years, I still was attracted to it for a number of reasons.

“First and foremost, I want the Northern Ireland economy to be a success for the next generation and therefore I wanted to have an influence and a say in how Brexit policy unfolded. I recognised that as an economist I would be well-placed to understand how the various national policies would impact us at a regional level,” she says.

The CBI represents two-thirds of the top 100 companies in Northern Ireland. But has the region’s voice or the voice of the business community been adequately represented in the Brexit talks?

“No and that is a thundering disgrace, particularly given the region is going to be the most impacted,” McGowan says. “There should have been an executive, a shared government, that should have been representing the people of Northern Ireland.”

She sidesteps a question about the pro-Brexit, anti-backstop position of the Democratic Unionist Party (DUP), a position that is at odds with the majority of Northern Ireland voters. As an industry body, the CBI can’t be party political but her frustration with Arlene Foster’s party is obvious.

She believes Northern Ireland voted to remain primarily for economic reasons but also because it doesn’t see immigration as a problem – the economy needs more migrant workers. And also because people are aware of the significant funding the region has received from Europe.

“The public has, however, been let down by the politicians, not just in Northern Ireland but right across the UK. People have been promised things that could never have been delivered,” she says.

UK prime minister Theresa May’s 2017 Lancaster House speech, when she famously promised the UK would leave the EU’s single market and the customs union, was when McGowan first realised how potentially damaging to Northern Ireland Brexit was going to be.

“We knew this would clearly mean a border for Northern Ireland and while they say this would be temporary and designed so there would be no checks . . . we all know the EU and Ireland will be forced to protect the integrity of the single market.”

McGowan now finds herself in the unenviable position of having to sell Northern Ireland to investors, while the region has no devolved government, no certainty around its trading relations with the rest of the world, and a chronic undersupply of labour, which is only likely to get worse under Brexit.

“Subsidiaries can’t bid for investment back at headquarter because all investments are off until things get sorted out and the companies know where they are. There is a big fear that these foreign direct investors will just ramp up production elsewhere in Europe while allowing the Northern Ireland plants to run down.”

Aircraft manufacturer Bombardier, one of the largest employers in Northern Ireland, produces wings for Airbus’s C-Series aircraft, and is expected to benefit from increased orders, resulting from the controversy surrounding rival Boeing’s 737 MAX 8 aircraft, which has been involved in two high-profile crashes. But this is contingent on Northern Ireland retaining access to the EU market.

And the Canadian company is currently seeking redundancies at its operations in the North.

Despite the notion that peace has led to prosperity, output per head and productivity per head in Northern Ireland has deteriorated relative to the rest of the UK since the 1998 Belfast Agreement.

But while GDP per head is significantly lower than that of the Republic, the North’s citizens enjoy a higher standard of living because of the generous transfers from London – €11 billion a year – which pay for better public services, particularly in healthcare.

“A peace process is really a 50-year process and we’re only 18-20 years into it – it’s not fully develop ed – it takes more time to fully embed and for people to realise the advantages they can pull out of it. Companies are only beginning to use the whole island as an economic zone, to see it as a bigger market, to gain economies of scale,” she says.

The CBI and its sister organisation in the Republic, Ibec, recently published a report warning of the consequences of a no-deal Brexit and the untapped potential of greater cross-border integration. The single electricity market was cited as an exemplar.

In a recent letter, McGowan and her team urged UK MPs to compromise and make progress to ensure that a no-deal scenario is taken off the table.

“Because ultimately politics is about compromise. Nobody is going win over or defeat the other, it has be compromise otherwise it’s a lose-lose,” she says.

Something we might expect her to say: The belief that Northern Ireland badly needs to restore its power-sharing government

Something that might surprise: Sticks pretty closely to a vegan diet and is a little obsessed with taking vitamin D, vitamin B and magnesium

1 Avoca warns of redundancies due to coronavirus
2 Virgin Media vows to withhold sports channels until Eir ‘pays its bill’
3 Coronavirus: We must save lives but we also need to live
4 Coronavirus spreads to sandwich king
5 Errant texts highlight weaknesses in banks’ digital shift
6 Over 400 complaints from migrant workers at meat plants lodged with WRC
7 Taxi app Free Now blames ‘technical issues’ for driver payment delays
8 Revised help-to-buy scheme opens for applications
9 The Irish Times Company of the Year: the three finalists
10 Divorce: What will it cost and can you afford it?
Real news has value SUBSCRIBE