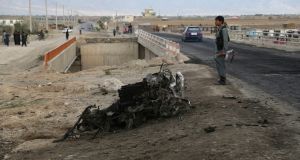 An Afghan security force member guards the site of a suicide bomb attack on Monday near the Bagram air base, north of Kabul. Three American service members and a US contractor were killed in the attack, for which the Taliban claimed responsibility. Photograph: Rahmat Gul/AP

The Taliban announced the beginning of its spring offensive on Friday, even as the insurgent group said the United Nations had lifted travel bans on 15 of its senior leaders to facilitate peace talks with the United States.

The announcements were a sign that though the peace talks are gaining momentum, with delegates from the Afghan government expected to meet with insurgents soon, fighting is likely to intensify all over the country.

Violence has got worse in recent weeks as the weather has warmed across Afghanistan, with each side killing dozens of the other’s forces every day. Last month, the government pre-empted the Taliban by announcing its own spring military offensive, amid Afghan leaders’ frustration over having been left out of the talks aimed at setting terms for a US troop withdrawal.

President Ashraf Ghani has bristled at the Americans’ decision to negotiate directly with the Taliban, despite the insurgents’ having refused to talk to his government. Mr Ghani’s national security adviser, Hamdullah Mohib, took those frustrations to Washington last month, sharply criticising Zalmay Khalilzad, the special envoy leading the American side at the talks in Qatar.

Recently, negotiators have been focused on moving the talks to the next stage, in which the Taliban would meet with Afghans, including delegates from the government, to discuss the country’s political future. Mr Khalilzad spent nearly a week in Kabul urging Afghan leaders to unite around a negotiating team before he flew to Qatar this week.

Although senior Afghan political leaders have been meeting to iron out their disagreements, they appear to be some distance from reaching a consensus, with election-season mistrust complicating the discussions.

Abdullah Abdullah, the government’s chief executive and Mr Ghani’s coalition partner, has threatened to boycott a grand council of thousands of elders that Mr Ghani has called for next month to discuss peace, a senior official said. Mr Abdullah and several other politicians challenging Mr Ghani for the presidency, in elections scheduled for September, fear that Mr Ghani will use the forum to advance his campaign.

Mr Khalilzad’s visit to Kabul was followed by an unannounced trip by Gina Haspel, the director of the CIA, Afghan officials said. The Taliban and a large delegation from Afghanistan, including government representatives, are expected to meet next week in Qatar for what is being described as an icebreaker conference, one that could eventually lead to direct negotiations.

US officials have been seeking waivers to the United Nations travel ban for several senior Taliban officials in order to facilitate the peace process, according to Afghan and Western officials. On Friday, the Taliban spokesman, Zabiullah Mujahid, said that 15 of the insurgency’s senior leaders had been removed from the travel sanctions list, for an initial period of nine months.

One Afghan official, speaking on condition of anonymity, said the United States had given the Afghan government a list of about a dozen Taliban members for whom it was requesting the waivers. But the official said the Americans had not given the government enough time to vet those names and give its approval. That process would include convening the Afghan national security council to discuss the matter.

It was unclear what Mr Khalilzad may have got from the Taliban in return for what appears to be a major concession. The Taliban has long wanted its leaders removed from the sanctions list. – New York Times