Theresa May could face cabinet revolt over customs union 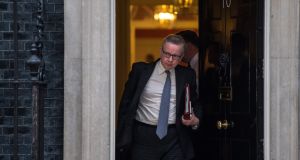 Theresa May could face a cabinet revolt on a customs union as peers prepare to inflict more defeats on the government over the EU withdrawal bill in a key week for the future of the UK’s relations with Europe.

Amid Brexiter threats of a leadership challenge, the former cabinet minister Nicky Morgan who chairs the Treasury committee, told the challengers to be careful what they wished for.

Although it has not been officially confirmed, there are well-founded reports that government ambitions to avoid a hard border in Ireland either through technological innovation or regulatory alignment have been rejected in preliminary negotiations in Brussels.

That has led to speculation that May is preparing to concede on a customs union, which has been a red line since the prime minister’s conference speech in October 2016.

Reports over the weekend suggested a “wargaming” exercise into the consequences of a concession showed that not even leading Brexiters like Michael Gove, the environment secretary, or Boris Johnson, the foreign secretary, would resign.

But on Sunday a source close to Michael Gove reiterated the environment secretary’s opposition. “Michael believes respecting the referendum result means taking back control of trade policy. He fully supports the prime minister’s position that this means leaving the customs union.”

Although the loss of other pledges in negotiations have been reluctantly accepted, such as the promise to reclaim control over fishing quotas from March 2019, accepting continued membership of a customs union would be of a different and much larger scale.

Downing Street sources also dismissed the idea. “The position remains very clear: we don’t think staying in a customs union is the right thing to do and it isn’t government policy to do so,” a spokesperson said.

Any customs union makes it effectively impossible to negotiate free trade deals with other countries – one of the government’s key ambitions and a central justification for leaving the EU.

But a meaningful vote on remaining in the customs union is likely in the next few months. At least 10 Tory backbenchers have signed an amendment to the trade and customs bill supporting continued membership.

1 Coronavirus: 442 new cases, 4 deaths as stricter house visitor limits introduced
2 Dr Tony Holohan expected to return to his post next week
3 Covid-19 infections from funeral led to a third of one restaurant’s staff self-isolating
4 How one couple’s weekend away resulted in 30 Covid-19 cases
5 Small children should be restricted to one square of chocolate a week
Real news has value SUBSCRIBE