Irishman describes seeing ‘a fireball coming towards me’

Armed police rushed to an incident at a London underground station on Friday (September 15) with local media reporting there had been an explosion on a packed rush-hour commuter train. 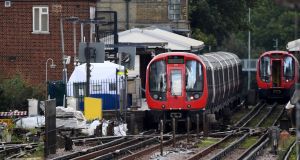 On a packed London Underground train at the height of rush-hour, and with passengers crammed like sardines, no one seemed to have noticed the white bucket wrapped in a supermarket carrier bag placed against a door towards the rear of the train.

At 8.20am on Friday, as the District Line train from Wimbledon pulled into Parsons Green station, the homemade bomb went off.

Rory Rigney (37), from Dublin, was just feet from the device, and saw “a fireball coming towards me”.

“It smelled like a fire extinguisher and there was this foam on the floor,” he said.

There were “red wires” coming out of the bucket. The Irishman said that one woman, who “looked like she had been burnt”, was being helped by people pouring water on her face.

Another witness, Ryan Barnett (25), was sitting further down the train with his headphones on. “All of a sudden, hundreds of people were running past me screaming a mixture of ‘stampede’, ‘attack’, ‘terrorist’, ‘explosion’, ‘get off the train’, ‘everyone run’.” Barnett, who works in politics, ran with them.

Media technology consultant Richard Aylmer-Hall (53) ran too. He had been “blissfully” reading his newspaper and listening to a podcast on his way to Paddington on the train, which has capacity for 865 passengers, and which was “absolutely packed” with commuters and schoolchildren. In the febrile panic that ensued after the incident, he heard a woman shouting about “a bag, a flash and a bang”.

With the train, fortunately, at a station, its doors were open. Hundreds ran in a terror-stricken stampede to a staircase leading to the station’s exit. “I saw crying women, there was lots of shouting and screaming. Some people got pushed over and trampled on,” said Aylmer-Hall.

Barnett made it to the staircase, but he said stewards were shouting “stop, stop, stop” as it became dangerously overcrowded. Everyone ended up squashed on the staircase.

“People were falling over, people were fainting, people were crying. There were little kids clinging on to the back of me,” he said. In the chaos, a pregnant woman lost her shoes and fell over.

Olaniyi Shokunbi (24), a fitness instructor, saw people lying on the floor covered in blood. “There was a little boy. I felt really sorry for him. He couldn’t have been more than 11. He had scratched his head. He was looking for his little brother,” he said. A woman on the floor couldn’t breathe. People all around were screaming and crying.

Initially, many of those fleeing had little idea what they were fleeing from. But those nearest the white bucket had heard a bang, then witnessed a “wall of flame” whoosh through the carriage.

South African Gillian Wixley (36), who lives in Putney, and was eight seats from the explosion, said: “It wasn’t a big explosion, more of a bang and then there was fire.”

As she rushed off the train, she saw “flames going up the wall”. Outside, a small schoolboy, aged about 10, was “sitting on the floor sobbing”, obviously in shock and very scared, she said.

As stunned and shocked passengers disgorged from the station’s entrance onto the streets, videos and photographs of what Scotland Yard would later determine was an improvised explosive device were appearing on Twitter.

It was blackened, twisted, and still in flames. “It was a white bucket, a builder’s bucket, in a white Aldi bag or Lidl bag,” said Chris Wildish, who was on the train.

“Flames were still coming out of it when I saw it and [it] has a lot of wires hanging out of it.”

Sylvain Pennec, a software developer from Southfields, near Wimbledon, who was about 10m from the device, but stopped to examine it, said: “It looked like a bucket of mayonnaise.”

Outside, armed officers were at the scene within minutes. Six fire engines, a fire rescue unit and about 50 firefighters were immediately dispatched, as was a fleet of ambulances.

Passengers stumbled out of the station, shaking, limping, some covered in blood, many tearful. They spoke of a “wall of flames”, of hearing a “bang” or a “whooshing” noise.

Among the first journalists at the scene, the BBC’s Sophie Raworth saw a woman stretchered out, her legs wrapped, being given oxygen and pain relief. “She seemed to have burns all over her body from top to toe,” said Raworth.

Robyn Frost, about to enter the station to travel into central London, saw “blood on the floor and people running down the stairs screaming “get out’”.

Aaron Butterfield, a production manager, who was also arriving at the station, described people “crawling over one another” in desperation as they tried to flee.

There was more panic, he said, when police told them there had been an explosion, and that “someone was running around with a knife” and there was possibly another “explosive device”, he said.

Two hours after the first emergency call, the Metropolitan Police declared it a terrorist incident. Eighteen people had been taken to four hospitals by ambulance, 10 of them suffering from what police described as “flash burns”. Another four self-presented at hospitals. None of the injuries was thought to be life-threatening.

Peter Crowley was among the injured, suffering burns to his scalp and singed hair. He was luckier than others, he told BBC News.