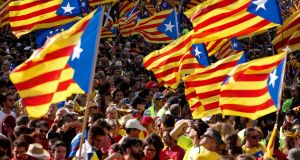 WikiLeaks founder Julian Assange has described it as “the most important political development in the West this year, by far” and it has already thrown Spain into its deepest political crisis of the modern era. Catalonia’s October 1st independence referendum might not even take place, given that the central government deems it illegal, but the campaign leading up to it began on Friday.

The Catalan regional government, led by Carles Puigdemont, is organising the referendum and plans to declare independence within 48 hours if the result is Yes to secession.

“What do you think will happen on October 1st? Of course we’ll vote!” he told supporters at a rally to open the campaign on Thursday night in Tarragona. Hours earlier, Puigdemont had made a final appeal to prime minister Mariano Rajoy to negotiate a referendum in a letter which he also sent to King Felipe.

But few expect a positive response. Once again this week, Rajoy has rejected sanctioning a self-determination vote, telling reporters “there can not be a referendum and it would be an absolutely illegal act”.

Given the determination on both sides, it is still unclear what exactly will happen on the day of the scheduled vote.

Rajoy’s Popular Party (PP) government has launched a legal offensive in a bid to thwart the process. It has appealed to the constitutional court against a referendum law and a Bill laying down the legal foundations for an independent state, both approved by the Catalan parliament in controversial circumstances last week. The court has suspended the two laws as it considers the appeals, a move which means little to the Catalan leadership, which refuses to acknowledge the legitimacy of the Spanish judiciary.

The central government has also started proceedings against the 712 of Catalonia’s 948 mayors who have offered the use of public spaces in their towns as voting stations. In addition, the head of the regional police, Josep Lluís Trapero, has been ordered to seize ballot boxes due to be used for the referendum.

On Friday, the Spanish government issued a new, financial, threat saying it will seize control of much of the Catalan budget if the regional administration refuses to pledge not to use any of its funds for the referendum.

Puigdemont leads a broad secessionist front which claims its majority in the Catalan parliament gives it a mandate to push ahead with the binding vote. But a poll published by the Catalan government’s statistics institute in late July showed support for independence had dipped to 41 per cent, with 50 per cent opposed.

A concern for those holding the referendum is the possibility of a low turnout by No voters who are deterred by the referendum’s illegal status. That might lead to a distorted result that heavily favours independence but which fails to represent all Catalans.

Nonetheless, those calling for independence are bullish not just about defying Madrid’s legal obstacles but also about the result of the referendum.

“I believe the Yes [vote] can win and will win and will win with a good margin to show the world there is a majority here in Catalonia that wants to be an independent state,” Ramon Piqué, campaign manager for the Catalan National Assembly (ANC), the most visible pro-independence civic group, told The Irish Times.

On Monday, hundreds of thousands of Catalans turned out on the streets of Barcelona for the region’s annual national day, in a show of peaceful force ahead of October 1st that was organised by the ANC.

The Catalan government received another boost on Thursday, when Barcelona mayor Ada Colau confirmed that her administration will support the October 1st vote.

Colau and her Barcelona en Comú platform had been ambivalent about the referendum, a stance that has been taken by much of Spain’s so-called New Left, which is spearheaded by Podemos. That party has walked a fine line between the staunch unionism of Rajoy’s PP and the Socialists on one hand and separatism on the other.

In a series of tweets about the Catalan crisis posted on Thursday, Podemos leader Pablo Iglesias called for the negotiation of a “new legal status for Catalonia within Spain, with more self-government and recognition as a nation” but not full independence.

For the moment, any such negotiation looks unlikely and the Catalan standoff is starting to gain international attention. European Commission president Jean-Claude Junker offered a mixed message on the issue on Thursday, saying the EU would respect the rulings of the Spanish courts, but adding: “If there were to be a Yes vote for Catalan independence we would respect that choice.”