Armed police rushed to an incident at a London underground station on Friday (September 15) with local media reporting there had been an explosion on a packed rush-hour commuter train. 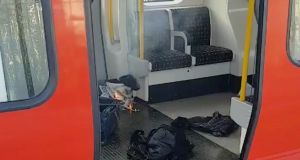 Personal belongings and a bucket with an item on fire inside it are seen on the floor of an underground train carriage at Parsons Green station in West London on Friday. Photograph: Sylvain Pennec/Reuters 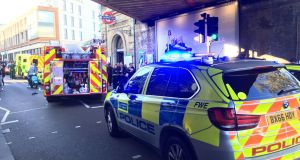 Emergency services attend an incident at Parsons Green station in west London on Friday morning amid reports of an explosion. Photograph: PA 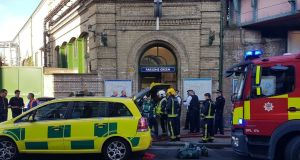 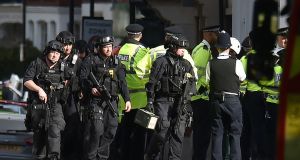 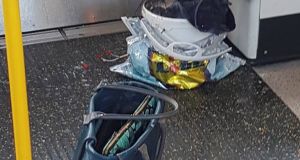 A bucket with an item on fire inside it and bads are seen on the floor of an underground train carriage at Parsons Green station in West London on Friday. Photograph: Sylvia Pennec/Reuters 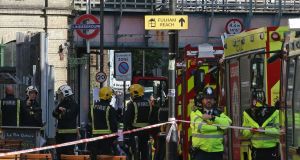 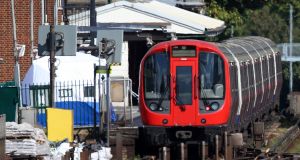 A forensic tent is seen next to a stopped tube train at Parsons Green underground station, in London, England. Photograph: Jack Taylor/Getty Images 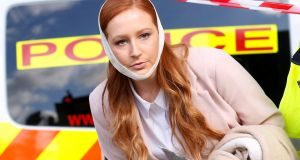 An injured woman is led away after an incident at Parsons Green underground station, in London, Britain. Photograph: Luke MacGregor/Reuters 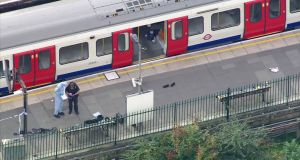 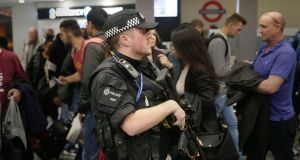 A homemade bomb exploded on a packed rush-hour commuter train in London on Friday, injuring 29 people, police said, in what was being treated as the fifth terrorism attack in Britain this year.

Passengers on board a London Underground train heading into the centre of the capital fled as fire engulfed a carriage at Parsons Green station in west London after the explosion at 8.20am.

Some suffered burns while others were injured in a stampede to escape. The National Health Service said 29 people had been treated in London hospitals following the incident. None were thought to be in a serious condition, the ambulance service said.

“We now assess that this was a detonation of an improvised explosive device,” Britain’s top counter-terrorism officer Mark Rowley told reporters. He said most of the injuries were thought to be flash burns.

Mr Rowley declined to answer whether the authorities knew who was responsible or if the suspected bomber had been on the train, saying it was a live investigation which was being assisted by the intelligence services.

He later said officers were sifting through surveillance footage and examining the remains of the device.

“This is a very complex investigation which is continuing at speed,” he told reporters. “We are chasing down suspects.”

Mayor of London Sadiq Khan also told LBC: “There is a manhunt under way as we speak”.

Britain has lifted its national security threat level to critical from severe, meaning an attack is expected.

British prime minister Theresa May said in a televised statement on Friday evening that armed police and members of the military would be seen on the streets in the coming days.

Islamic State has claimed responsibility for the blast through its Amaq news agency.

Pictures taken at the scene at Parsons Green showed a white bucket with a supermarket freezer bag on the floor of one train carriage. The bucket was in flames and there appeared to be wires coming out of the top.

Sky News has reported that the device had a timer, which had probably failed to detonate fully.

British police have not said anything about who could be behind the attack.

London Ambulance said it had sent “multiple resources” including its hazardous area response team to the scene and the fire brigade said it had sent six engines and 50 firefighters who had helped evacuate another train at the station with 253 people on board.

Another attack in London by a loser terrorist.These are sick and demented people who were in the sights of Scotland Yard. Must be proactive!

If anyone is feeling shocked or confused at #ParsonsGreen, I'm round the corner and the kettle's on 🤗

This looks very much like what I imagine a bomb that didn't detonate properly would look like. Hope I'm wrong. #ParsonsGreen pic.twitter.com/HmV75syNVd

I'm safe - just had to run for my life at #ParsonsGreen station - huge stamped, lots injured. Not sure why - fire/explosion mentioned. pic.twitter.com/zRvRPWOuzA

All 8 patients treated at St Thomas’ Hospital after today’s incident at Parsons Green have been treated and safely discharged.

Were you at Parsons Green station?

Did you witness the events?

“I was on second carriage from the back. I just heard a kind of whoosh. I looked up and saw the whole carriage engulfed in flames making its way towards me,” Ola Fayankinnu, who was on the train, said.

“There were phones, hats, bags all over the place and when I looked back I saw a bag with flames.”

Another witness, who did not want to be named, said: “It was every man for himself, people were panicking, people just ran over each other. There was a lady with badly burned legs, it was pretty shocking. The woman I was with was just run over - it was a stampede.”

Outside the station, a woman was seen sitting on a footpath with a bandage around her leg.

A witness saw a woman being carried off on a stretcher with her legs covered in a foil blanket.

A witness also reported seeing armed police scouring a stationary train and a bomb disposal unit at the scene.

In 2005, 52 people were killed when four British Islamists carried out suicide bomb attacks on three London Underground trains and a bus. This year Britain has suffered four attacks blamed on terrorists.

Ms May returned to London to chair a meeting of Britain’s emergency response committee Cobra on Friday following the blast.

“My thoughts are with those injured at Parsons Green and the emergency services who, once again, are responding swiftly and bravely to a suspected terrorist incident,” May said.

Speaking after the Cobra meeting, Ms May initially said Britain’s threat level would remain on its second-highest rank of severe following the “cowardly attack”, but it would be kept under review.

Following the attack, Transport for London said there was no service on the western part of the District Line which runs through Parsons Green.

“Another attack in London by a loser terrorist,” US president Donald Trump said on Twitter after the blast. “These are sick and demented people who were in the sights of Scotland Yard. Must be proactive!”

Asked whether Trump knew something Britain did not, Ms May said: “I never think it’s helpful for anybody to speculate on what is an ongoing investigation.”

A US official said that, at this point, US agencies had no information to back up any suggestion by Trump that Britain had advance warning or specific intelligence on the attack.

In a later phone call with Ms May, Trump expressed support for those injured and “pledged to continue close collaboration with the United Kingdom to stop attacks worldwide targeting innocent civilians and to combat extremism”, the White House said.

Minister for Foreign Affairs Simon Coveney said there were no indications to suggest that any Irish citizens had been affected “as of now”.

“I am shocked by the incident in London this morning, which the Metropolitan Police are treating as a suspected terrorist attack,” Mr Coveney said.

“My department is monitoring the situation closely through the Irish Embassy in London and the Consular Division in Dublin.

Mr Coveney said the Irish Government expressed solidarity with the people of London at this time.

In March this year, a man drove a car into pedestrians on London’s Westminster Bridge, killing four, before he stabbed a policeman to death outside parliament.

A further 22 people were killed in a suicide bombing at a pop concert in Manchester in May, and the following month three Islamist militants drove into pedestrians on London Bridge before stabbing people at nearby restaurants and bars, killing eight.

In June, a van was driven into worshippers near a mosque in north London, leaving one man dead.

Mr Rowley said that in the three years until March this year, police had foiled 13 potential attacks, but in the next 17 weeks there were four successful terror attacks while the authorities thwarted six others.

Were you at Parsons Green station? Did you witness the events?