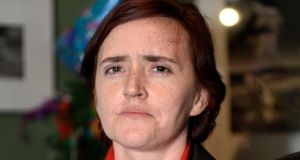 An Irish-born candidate for the leadership of the UK Independence Party, Anne Marie Waters, has rejected criticism of her as a “neo-fascist” during tense exchanges at a party hustings.

A controversial anti-Islam activist, Ms Waters told the audience in London on Tuesday night that it was a “relief to be here” after recent efforts to remove her from the ballot. Over the weekend, rival candidate Henry Bolton – who sat next to Ms Waters at the members-only debate – launched an abortive challenge to the party executive’s decision to allow the director of the Sharia Watch pressure group on to the ballot.

“When the people in power are trying to silence a person, my advice is that you need to listen to that person,” Ms Waters said to loud applause.

“I don’t think I could ever work with anyone who’s ever called me a neo-fascist without knowing what a neo-fascist is,” Ms Waters said, referring to a recent article by Bill Etheridge, a Ukip member of the European Parliament who sat at the other end of the stage.

Ms Waters (40), grew up in Dublin and went to school in Stoneybatter in the north inner city. She settled in the UK around 15 years ago, after living in Germany and the Netherlands.

English interviewers still notice a “Dublin lilt”, but British flags wave proudly in the background of her slickly produced campaign video, in which Ms Waters defines herself as “passionately, loyally, resolutely and proudly British”.

Former leader Nigel Farage said recently that Ukip would be “finished” if it became an anti-Islam movement. Ms Waters has called the religion “evil” and “abhorrent”. Her focus on issues such as female genital mutilation (FGM), Sharia councils and banning the burka have caused concerns in the party, as have her links to figures on the far right, such as Tommy Robinson, the former leader of the extreme right-wing group, English Defence League.

Mr Etheridge said that Ukip should focus on issues such as the economy rather than “looking up little girls’ dresses” to check for signs of FGM, as proposed by the party recently.

However, bookmakers have installed Ms Waters as second favourite to take over Ukip, behind London Assembly member Peter Whittle. She has also picked up the endorsement of one of Ukip’s MEPs, Stuart Agnew, who compares her to Joan of Arc. Speaking about Brexit at the hustings on Tuesday night, Mr Whittle said he wants the UK to be “a nation once again”.

Ms Waters returned to Dublin last summer to speak at an event organised by the right-wing Identity Ireland party, telling supporters that “there’s still time for Ireland” to avoid what she perceived were problems caused by Muslim immigration.

Ukip had been a powerful political force in recent years in Britain, taking the largest share of the vote at the 2014 European Parliament elections and a respectable 13 per cent at the 2015 general election. But the party suffered electoral collapse in June’s poll, shedding 3.3 million of the nearly 4 million votes it won in 2015 – winning no seats.

The internal divisions afflicting Ukip were obvious throughout the debate, with one candidate saying that the party is “broken”.

The winner of the leadership contest will be decided by a ballot of party members and announced on September 29th.