‘Disappointing and concerning’ that progress on Northern Ireland so slow, says diplomat 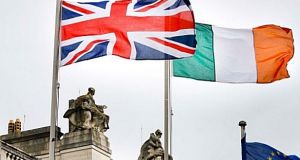 Ireland’s ambassador to London Adrian O’Neill: “A backstop that has a time limit on it ceases to be a backstop.” Photograph: Brian O’Leary

Ireland’s ambassador to London Adrian O’Neill has expressed concerns about British “backsliding” over the issue of the Northern Ireland backstop by demanding it should be time limited.

Mr O’Neill said Britain had agreed last December, and again in March, that there should be a backstop that would operate unless and until a permanent solution was found to keep the Border open. “There seems to be some degree of backsliding on those insofar as this demand for a time-limited version of the backstop is not consistent with what was agreed in December and March. We are concerned by that. A backstop that has a time limit on it ceases to be a backstop,” he said.

Mr O’Neill told a seminar hosted by the British Academy and the Royal Irish Academy that it was “disappointing and concerning” that there had not been more progress made on Northern Ireland. And he criticised some pro-Brexit voices in Britain who have dismissed the need for a legally-binding guarantee that there should be no hard border.

The backstop: A crucial safety net?

“It is even more concerning when we hear comments from some quarters here that the backstop is unnecessary – allegedly an irrelevant distraction hindering the achievement of a clean-break Brexit and frustrating the achievement of the grand vision of a free-trading global Britain,” he said. “Such arguments are of course entirely self-serving – intended to minimise or entirely dismiss the need for a robust solution to the Border problem. The truth – however inconvenient for some – is that the backstop for Northern Ireland is a crucial safety net for the Belfast/Good Friday Agreement and for protecting the gains of a peace process which benefit all the people on these islands.”

British prime minister Theresa May told MPs on Monday that any backstop cannot be limited to Northern Ireland and must keep the whole of the UK inside a customs arrangement with the EU. She also said that it must be time limited, although she held back from calling for a specific date on which it should end.

Britain wants a UK-wide customs backstop to be written into the legally-binding withdrawal agreement but the EU says it must instead be part of a political declaration on the future relationship. Mr O’Neill suggested that the EU could only move from its current position if Britain offered up-front guarantees of a “level playing field” on issues like competition policy, workers rights and the environment.

“I think there are some genuine constraints about how far the EU can go. It’s not just about a pedantic legalism that prevents people from dealing with certain issues in the withdrawal process which are for the future relationship. There are definite concerns around how much you can do around customs union arrangements in a withdrawal treaty without also similarly addressing in a watertight way issues around a level playing field,” he said.