Britain and EU fail to reach deal ahead of summit 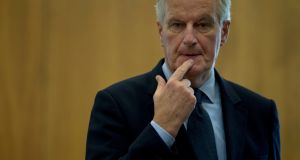 Britain and the European Union have abandoned efforts to reach a deal on the Northern Ireland backstop ahead of Wednesday’s EU summit after they failed to agree on whether it should be time-limited.

After an unexpected, one-hour meeting in Brussels with Brexit secretary Dominic Raab, EU chief negotiator Michel Barnier said that a week of intensive talks had ended without agreement.

“Despite intense efforts, some key issues are still open, including the backstop for Ireland/Northern Ireland to avoid a hard border,” he said.

A meeting of negotiators from the 27 member states scheduled for Monday has been cancelled and EU sources said there would be no further negotiations before Wednesday’s summit.

“The leaders will meet without a deal in principle,” one senior EU figure said of this week’s European Council. “There will be no deal agreed before Wednesday. Barnier is holding firm. The UK are not holding up their side of the bargain. A little bit of drama was expected at the summit – and it looks like we are going to get it.”

EU sources suggested, however, that negotiations are likely to resume after Wednesday’s meeting and that a special Brexit summit could still be convened in November. Downing Street and the department for exiting the European Union also sought last night to play down the seriousness of the setback represented by the failure to reach a deal this week.

“In the last few days, UK and EU negotiators have made real progress in a number of key areas. However, there remain a number of unresolved issues relating to the backstop. The UK is still committed to making progress at the October European Council,” a spokesperson said.

Britain and the EU appeared to be closing in on a backstop deal that would have seen Northern Ireland remaining aligned to parts of the EU single market while the whole of the UK would remain in a customs union with the EU. Under pressure from Conservative Brexiteers, Theresa May’s government has sought to have the arrangement time-limited.

The Government has argued consistently that a backstop as outlined in the joint report agreed last December between Britain and the EU could not be time-limited.

DUP leader Arlene Foster, whose party has warned Ms May against agreeing to any new customs or regulatory barriers between Northern Ireland and the rest of the UK, will meet Taoiseach Leo Varadkar for a private dinner in Dublin on Monday. They are expected to discuss Brexit and the restoration of the Northern Ireland executive among other issues. Ms Foster will meet separately with Fianna Fáil leader Micheál Martin.

Mr Barnier will brief EU leaders on Wednesday evening about the state of the negotiations, and the prospects of concluding a withdrawal agreement and a political declaration on the future relationship with the UK in time for another summit next month.