Two of the 20th century’s most contentious figures sainted 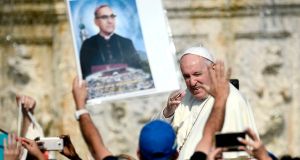 Pope Francis waves to the jubilant faithful after presiding over a canonisation ceremony in St Peter’s Square at the Vatican. Photograph: Getty Images

The prelate was canonised in Rome on Sunday. And the agency will hold a remembrance Mass for the new saint at Maynooth on Wednesday, November 7th.

Archbishop Romero was murdered in 1980 while saying Mass in San Salvadoran, while Paul VI was pope, during one of the Catholic Church’s most turbulent periods.

“Trócaire had a very close association with Archbishop Romero,” said agency chief executive Caoimhe de Barra. “In 1979 we began funding the El Salvador Human Rights Commission, which had been founded by the archbishop, in response to the unlawful killing of 8,000 people,” she said. The chief executive added that his “values, conviction and compassion still influence Trócaire today and help guide us in our work”.

Pope Francis elevated Romero and Paul VI, two of the most contentious Catholic figures of the 20th century, in a ceremony before tens of thousands of people in St Peter’s Square. The pontiff declared the two saints along with five lesser-known people born in Italy, Germany and Spain during the 18th and 19th centuries.

With images of the seven new saints hanging from St Peter’s Basilica behind him, he called Pope Paul “a prophet of an extroverted church” who opened it up to the world. And he praised Archbishop Romero for disregarding his own life “to be close to the poor and to his people”.

Archbishop Romero’s canonisation has long been opposed at the Vatican and by powerful conservatives in the Latin American church who believe he had become too political in life and even more so in death. This changed with the election of Pope Francis in 2013. And in 2015 the Vatican declared the prelate had died a martyr.

Pope Paul VI guided the church through the conclusion of the Second Vatican Council and implementation of its reforms. Elected in 1963, he died in 1978 and is perhaps best known for his 1968 encyclical, Humanae Vitae (On Human Life) which sustained the church’s ban on artificial birth control.

The other five canonised by Pope Francis during the ceremony were: Francesco Spinelli from Milan, founder of the Institute of the Adorers of the Blessed Sacrament in 1882; Vincenzo Romano who helped restore the town of Torre del Greco which was almost completely destroyed by an eruption of Mount Vesuvius in 1794; Maria Catherine Kasper, who in 1848 founded the Poor Handmaids of Jesus Christ in Germany; Nazaria Ignazia of St Theresa of Jesus who, in Bolivia, founded the Congregation of the Missionary Crusaders of the Church in 1926; and the devout Nuncio Sulprizio who died aged 19 at Naples in 1836.