Brexit: Raab dashes to Brussels for meeting with Barnier 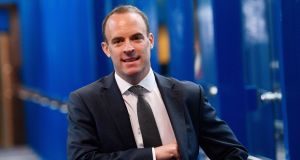 The UK’s Brexit secretary Dominic Raab is making a dash to Brussels on Sunday for face-to-face talks with the EU’s chief negotiator Michel Barnier, days ahead of a “moment of truth” EU leaders’ summit.

A British government spokesman said Mr Raab would arrive in the Belgian capital on this afternoon for talks with Mr Barnier.

The ambassadors of the 27 remaining EU states and the Commission will meet to discuss Brexit later on Sunday.

Officials are trying to hammer out at least an outline agreement for the divorce this weekend, in time for an announcement on Monday and an EU summit on Wednesday.

European council president Donald Tusk told British prime minister Theresa May last month he needed to see “maximum progress” by this week’s European council meeting of leaders on the issue of avoiding a hard Border on the island of Ireland.

The meeting comes as Mrs May faces a potential Tory mutiny and increased pressure from her DUP allies over her Brexit plans.

The prime minister faces a political battle over a plan which could keep the UK in a customs union to avoid a hard Border between the Republic and Northen Ireland.

Meanwhile, Democratic Unionist Party leader Arlene Foster is reported to have said a no-deal Brexit was now the most likely outcome after talks with senior EU figures including Mr Barnier in Brussels.

Mrs Foster, who is due to meet the Taoiseach Leo Varadkar on Monday, is opposed to any customs arrangement which would result in Northern Ireland being “annexed” or impose extra checks on goods travelling to or from Great Britain.

With continued speculation that Leave-supporting British ministers could resign if Mrs May presses ahead with the plan, Mr Davis said: “This is one of the most fundamental decisions that government has taken in modern times.”

Writing in The Sunday Times he said: “It is time for the Cabinet to exert their collective authority. This week the authority of our constitution is on the line.”

The issue of the Border between Northern Ireland and Ireland is one of the last remaining obstacles to achieving a divorce deal with Brussels, with wrangling continuing over the nature of a “backstop” to keep the frontier open if a wider UK-EU trade arrangement cannot resolve it.

The European Union’s version, which would see just Northern Ireland remain aligned with Brussels’ rules, has been called unacceptable by Mrs May and is loathed by the DUP.

Mrs May’s counter-proposal is for a “temporary customs arrangement” for the whole UK, but Tory Brexiteers are suspicious this could turn into a permanent situation, restricting the freedom to strike trade deals around the world.

The Sunday Times said at least nine ministers want Mrs May to change course when the Cabinet meets on Tuesday.

Speculation about possible resignations has centred on Andrea Leadsom, Penny Mordaunt and Esther McVey, but the newspaper also indicated that Scottish Secretary David Mundell and Scottish Tory leader Ruth Davidson could quit because special arrangements for Northern Ireland could fuel the case for Scottish independence.

Mrs May’s own position also appeared in jeopardy, with as many as 44 letters demanding a vote of no confidence reportedly submitted to the Conservative 1922 Committee - just four short of the number required to trigger a ballot.

The Northern Irish situation is politically problematic for Mrs May because her minority administration depends on the votes of the 10 DUP MPs.

A leaked email reported in the Observer indicated Mrs Foster was ready to block a Brexit deal.

According to a private email exchange between senior UK officials, seen by the newspaper, Mrs Foster gave her views during a dinner with the leader of Conservative MEPs, Ashley Fox.

The leaked email said Mrs Foster described the EU’s chief Brexit negotiator Mr Barnier as “difficult and hostile” and indicated “the DUP were ready for a no-deal scenario, which she now believed was the likeliest one”.

Writing in the Belfast Telegraph on Saturday, Mrs Foster said she appreciated the risks of a no-deal Brexit but “the dangers of a bad deal are worse”.

She added: “The DUP’s actions this week are not as some have suggested about ‘flexing muscle’. “This is no game.

“Anyone engaging in this in a light-hearted way foolishly fails to grasp the gravity of the decisions we will make in the coming weeks.”

A further demonstration of Tory resistance to Mrs May’s plans came from MP Anne-Marie Trevelyan, who wrote in The Sunday Telegraph that “the idea of remaining in the customs union - even it if is called a ‘temporary customs arrangement’ - after the end of the transition period, in to the 2020s, means simply delaying Brexit and causing the 17.4 million people who voted for it to lose faith in our democracy”.

Jacob Rees-Mogg, chairman of the European Research Group of pro-Brexit MPs, warned that when it came to the backstop proposal “temporary means eternal”. - PA