After debate on regulating vaping, Hong Kong’s leader goes straight for a ban 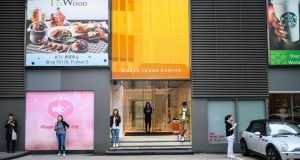 Workers stand outside a commercial building to use their phones and smoke during a break in Hong Kong. In banning e-cigarettes, Hong Kong joins Singapore, Thailand, Uruguay and 24 other countries. Photograph: Anthony Wallace/AFP/Getty Images

Any plans Big Tobacco had to gain a bigger stake in the Hong Kong market went up in smoke after the territory’s chief executive Carrie Lam made the surprise announcement that the territory was banning e-cigarettes and other new smoking products to protect the health of minors.

There has been a heated debate in Hong Kong this year about the pros and cons of regulating vaping and other new tobacco forms, such as heat-not-burn products and herbal cigarettes. However, after speaking to doctors, teachers and parents, Ms Lam opted to go straight for a complete ban.

“I have decided that, with the protection of public health as the prime consideration, the government will submit proposed legislative amendments in this legislative session to ban the import, manufacture, sale, distribution and advertisement of e-cigarettes and other new smoking products,” she said during her annual policy speech.

Vaping has been around for several years now but the overall health effects of e-cigarettes, which typically contain nicotine, are unclear. Ms Lam said e-cigs were often targeted at youngsters and non-smokers, and acted as a gateway to smoking conventional cigarettes by re-normalising the concept of smoking.

“The fact is: all these new smoking products are harmful to health and produce second-hand smoke. There is also a lack of sufficient evidence to prove that these products can help quit smoking,” she said.

In banning e-cigarettes, Hong Kong joins Singapore, Thailand, Uruguay and 24 other countries. Worldwide, the mar ket for cigarettes is declining, although across the border from Hong Kong, mainland China continues to spark up with great enthusiasm.

China is the largest producer and consumer of tobacco products, with 307 million smokers, and half of the country’s men light up on a regular basis.

By contrast, Hong Kong’s smoking rates are already pretty low, boosted by the expansion of no-smoking areas and regular, punitive increases in tobacco duty. The rate of smoking among those aged 15 and above has dropped from 20 per cent in the 1980s to about 10 per cent now. The aim is to cut this to 7.8 per cent by 2025, Ms Lam said.

By comparison, the rate in Ireland is about 22 per cent for those aged 15 and over, according to the HSE.

Tobacco lobby groups were unhappy with the decision, and Ms Lam said she received more than 3,000 letters urging her not to ban e-cigarettes.

“Without doubt the tobacco industry is strong at lobbying, but we have to do what is right for young people’s health,” she told a briefing after what was her second policy address as chief executive.