British Prime Minister Boris Johnson said he would not negotiate a delay to Brexit, after lawmakers backed a proposal to withhold approval for his agreement until formal ratification. Video: UK Parliament 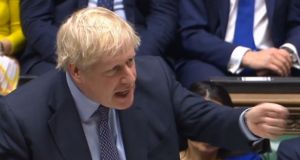 UK Prime Minister Boris Johnson speaks in the House of Commons in London on Saturday.

British prime minister Boris Johnson has sent the European Union an unsigned photocopy of a request for a Brexit extension from MPs, stressing it is “Parliament’s letter” and not his, according to reports.

It is also understood that Mr Johnson has sent European Council President Donald Tusk a second letter stating he personally is not asking for an extension, and that he believes it is a mistake.

Mr Johnson’s move came after MPs backed a proposal to withhold approval for his deal until formal ratification legislation has passed.

Under the terms of the so-called Benn Act, Mr Johnson was required to seek a further extension to the Article 50 withdrawal process if no deal was agreed upon by parliament on Saturday.

“I will not negotiate a delay with the European Union,” Mr Johnson told MPs and peers in a letter also sent on Saturday evening. “I will tell the EU what I have told the British public for my 88 days as prime minister: further delay is not a solution.”

“The public want us to get Brexit done so the country can move on. The best thing for the United Kingdom and the European Union is for us to leave with this new deal on 31 October.”

Mr Johnson said that the British government, next week, would be introducing legislation “ needed for us to leave the European Union with our great new deal on October 31.”

“I hope colleagues on all sides of the House will – faced with a choice of our new deal or no deal – support this new deal.”

In a special Saturday sitting, the Commons voted by 322 to 306 – a majority of 16 – in favour of the amendment by the former Cabinet minister Sir Oliver Letwin withholding approval until legislation to implement the deal is in place.

Sir Oliver, one of the MPs to have the Tory whip withdrawn after rebelling on Brexit, said it was an “insurance policy” intended to ensure the UK cannot “crash out” of the EU on October 31st without a deal.

Labour leader Jeremy Corbyn warned Mr Johnson he could not ignore the provisions of the Benn Act. “It’s an emphatic decision by this House that has declined to back the prime minister’s deal today and clearly voted to stop a no-deal crash-out from the European Union,” he said.

The @Europarl_EN's Brexit Steering Group will consider the outcome of today's vote for the Letwin amendment on Monday. Whatever happens next, the marches outside the Parliament show just how important a close EU - UK future relationship is.

Should that happen, President Tusk will consult all 27 Heads of State & Govt on whether or not we will grant one. Extension can only be granted by unanimity. #Brexit

“The prime minister must now comply with the law. He can no longer use the threat of a no-deal crash-out to blackmail members to support his sell-out deal.”

In a speech to the Commons, the DUP politician Sammy Wilson said that the agreement cut off Northern Ireland from the country “to which we belong”.

“We will not give in to this agreement which we believe does damage to our part of the United Kingdom and which will lead to the focus of attention away from London, towards Dublin.

On the Letwin amendment, he said: “We would be failing in our duty if we do not use every strategy which is available to try and give guarantees, changes and alterations which will safeguard the interests of the United Kingdom, our constituents and the interests we represent.”

The Scottish National Party leader at Westminster Ian Blackford said that if Mr Johnson acted as if we was “above the law”, he would find himself in court.

Liberal Democrat leader Jo Swinson said: “The most urgent thing right now is the prime minister complies with the law.”

Mr Varadkar, reacting to the MPs’ vote to delay a decision on Mr Johnson’s deal said: “The European Union and United Kingdom made a Withdrawal Agreement last Thursday that defends Ireland’s interests. The House of Commons voted today to defer a decision on whether or not to ratify that agreement.

“To date, no request for an extension has been made by the UK Government. Should that happen, President Tusk will consult with all 27 Heads of State & Government on whether or not we will grant one. An extension can only be granted by unanimity.”

Tánaiste Simon Coveney told RTÉ Six One news: “The Irish Government position has always been that an extension is preferable to a no-deal and I don’t think that will change, but this has to be a decision that is a collective decision by the European Council.”

“Any one prime minister can prevent that and I think the EU wants to see certainty and an end to endless negotiation and speculation so I think a request for an extension is not straightforward.”

“The president held a conversation with the British prime minister and shared his view for the need for a swift clarification,” an official at the French presidency told Reuters.

“He signalled a delay would be in no one’s interest,” the official added.

Sinn Féin president Mary Lou McDonald said Saturday’s vote at Westminster will “do nothing” to allay the Brexit fears of workers, businesses or farmers.

“Today we have witnessed more farce and dysfunction in the British ‘House of Chaos’. What happened today has nothing to do with Ireland, our interests, our economy or our agreements. No one should be under any illusion about that.

“Today’s antics and bluster will not allay the fears of Irish workers, business or agri foods producers and our border communities. The majority of the people of the north did not consent to Brexit. It is being foisted on them against their democratic wishes. Sinn Féin will continue to work to defend Ireland from the worst impacts of Brexit and ensure there will be no hard border, no unionist veto and that the Good Friday Agreement will be protected.”

Brexit co-ordinator for the European Parliament Guy Verhofstadt, said the parliament’s Brexit steering group would consider the outcome of the Commons’ vote on the Letwin amendment on Monday. He added that “Whatever happens next, the marches outside the Parliament show just how important a close EU - UK future relationship is”.

The speaker of the House of Commons John Bercow said he would rule on Monday if he will allow the government to put forward a vote on Mr Johnson’s Brexit deal. There is a convention in parliament that the same question cannot be put twice during the same session. The government had tried to get lawmakers to approve the deal on Saturday but MPs instead backed a proposal to withhold support for the deal until formal ratification legislation has passed.

House of Commons leader Jacob Rees-Mogg said the government planned to put the deal to a debate and meaningful vote on Monday.

MPs asked Mr Bercow if this was permitted, to which he responded: “I will reflect on it and give what I hope is a fully considered ruling on this matter on Monday. I will do so of course having taken advice in appropriate quarters.

“The government is not the arbiter of what is orderly.”

SNP MP Joanna Cherry, who brought the case which led to Mr Johnson’s suspension of Parliament being ruled unlawful, said they would continue to pursue the Prime Minister through the court to enforce the Benn Act. “We’re back in court on Monday morning and it will be possible then to secure the court’s assistance if the Prime Minister has flouted the law and the promises he gave to the court,” she told the Commons.

Ministers have signalled that they will press ahead with plans to table the legislation next week with a view to securing the UK’s departure by the end of the month.

As MPs voted inside the Houses of Parliament, hundreds of thousands of protestors gathered in central London to call for a “people’s vote” on Brexit. – Agencies