Brexit: So we have a deal, but what happens now and will the Commons back it? 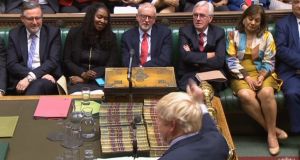 EU and UK negotiators have agreed a final deal in Brussels that would allow the UK to leave the EU – possibly by the October 31st deadline, if ratified – more than three years after the UK voted to leave the EU.

The deal would avoid a hard border on the island of Ireland, a condition set by both sides in December 2017.

If you’re playing catch-up on this story, Simon Carswell, Public Affairs Editor, has written a handy guide to the deal, while Denis Staunton, London Editor, examines how the deal came to be done. Here’s how events unfolded on Thursday.

But what happens now?

The deal needs to be passed by the British parliament with the House of Commons set for an extraordinary sitting on Saturday to go over the agreement.

If the parliament does not support it, Mr Johnson is compelled under the Benn Act to request a further Brexit delay to the end of January.

With his key and influential allies in the Democratic Unionist Party (DUP) firm in their rejection of the deal, Mr Johnson will have to embark on a charm offensive on Friday in a bid to get his deal backed.

The European Parliament must also ratify the deal and must get final sign-off from the European Council, which represents the remaining 27 member states.

What numbers are needed in the Commons for the deal to pass?

Boris Johnson faces a daunting task in trying to secure parliamentary approval for his Brexit deal not helped by the DUP’s stance.

Analysis suggests that unless the British prime minister can persuade the DUP to drop its opposition, or persuade several Labour MPs or independent parliamentarians to support the deal, Mr Johnson will struggle to win a House of Commons majority.

The Financial Times has estimated that 321 MPs could vote against the deal, with 318 supporting it.

Many members have yet to declare how they will vote when the Commons considers Mr Johnson’s deal on Saturday. It will be the first Saturday sitting since Argentina’s invasion of the Falkland Islands in 1982.

The Conservatives do not have a majority in the House, so Mr Johnson has to assemble a coalition of MPs to vote for his Brexit deal.

Out of the 287 Tory MPs, nearly all are expected to back the deal, including most of the 28 hardline Eurosceptic Conservatives - dubbed the Spartans - who voted repeatedly against Theresa May’s withdrawal agreement.

British government whips who serve as business managers in the Commons will turn the screws on Tory MPs over Friday and Saturday. “Our whipping is going to be medieval,” said one government official.

The Spartans belong to the European Research Group of pro-Brexit Tory MPs, whose leader Steve Baker has already indicated he will vote for the deal.

“We’ll meet on Saturday morning to decide whether to support it,” said one senior ERG member.

Downing Street had expected three to five Spartans not to back Mr Johnson’s deal before it was unveiled on Thursday, but none have so far come out against.

The next challenge for Mr Johnson is to win over 23 independent Conservatives - former Tory MPs who have had the party whip removed.

At least three are unlikely to back the deal: Dominic Grieve, Guto Bebb and Justine Greening.

Most of the other 20 have yet to declare their voting intentions, but the majority are expected to support the agreement, according to Nicholas Soames, the Tory grandee who was among those to have the whip removed.

Mark Spencer, Conservative chief whip, told the cabinet on Wednesday that he thought 15 independent Tories would rally behind the deal. Backing the revised withdrawal agreement could give them a route back into the Conservative party.

But if Mr Johnson is successful in winning over the Spartans and independent Conservatives, there is still no Commons majority for a deal.

Without the DUP, the British prime minister’s efforts will be partly focused on how many other independent MPs - mainly former Labour parliamentarians - can be persuaded to back his agreement.

If Mr Johnson fails to garner much support among these independent MPs, his last hope is to woo Labour - against a backdrop of party leader Jeremy Corbyn pledging to oppose the deal.

Until now the number of rebel Labour MPs talking to Downing Street about supporting Mr Johnson’s deal has been only in single figures - up to nine, who mainly represent Leave constituencies. They are not all certain to back the agreement.

Many Labour MPs went cold on supporting Mr Johnson after he last month demanded that the EU rewrite the terms of the UK’s future relationship with the bloc to allow Britain to substantially diverge from European rules after Brexit.

Stephen Kinnock, one of 17 Labour MPs supporting the case for a Brexit deal, said the prime minister’s stance had “rung alarm bells among Labour MPs”.

But Mr Johnson appears to have backtracked, with the revised political declaration on future relations between the UK and the EU stating there should be “common high standards” between the two sides on “state aid, competition, social and employment”.

While that could increase the number of rebel Labour MPs backing Mr Johnson’s deal, some said he had “alienated” them. “Theresa May made painstaking efforts to try to bring us on board. Boris Johnson hasn’t really tried,” said one.

The Scottish National party’s 35 MPs and the 19 Liberal Democrats are expected to vote against Mr Johnson’s deal. Plaid Cymru’s four MPs and the single Green are also set to reject it.

Even if Saturday’s vote is won by Mr Johnson, he still faces further votes on legislation in the coming weeks to put in place the necessary provisions for the UK to leave the European Union on time.

Who has said what about the new deal?

The British prime minister described it as a “fair” and “reasonable” agreement. “I hope very much now, speaking of elected representatives, that my fellow MPs in Westminster do now come together to get Brexit done, to get this excellent deal over the line and deliver Brexit without any more delay,” Mr Johnson said at a Brussels press conference.

But Labour leader Jeremy Corbyn was quick to dismiss the agreement. “As it stands we cannot support this deal,” the Labour leader told reporters in Brussels, adding that it did not seem to have the backing of “many of his allies on his own backbenches”.

EU chief negotiator Michel Barnier told a press conference that discussions “have at times been difficult” but that they had “delivered together”.

European Council president Donald Tusk told reporters that a “deal is always better than no deal” but said he wasn’t happy because of the “substance of this political fight”.

Scotland’s First Minister Nicola Sturgeon ruled out her MPs in the SNP backing the deal, insisting it will mean Scotland alone is “treated unfairly” when the UK leaves the European Union.

And the DUP has repeated its opposition to the deal. Writing in the Belfast Telegraph on Friday, party leader Arlene Foster confirmed her party’s MPs would not vote for the deal.

She wrote: “Tomorrow our Members of Parliament will oppose the proposals. We worked intensively with the government over recent weeks to try and reach a fair and balanced deal.” - PA, Financial Times