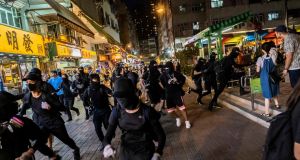 Chinese authorities have clamped down on the importation of black clothing into Hong Kong in an attempt to stifle ongoing protests, as well as a host of other items associated with the increasingly violent street demonstrations.

Freight companies have reported that black T-shirts and jeans, yellow helmets, umbrellas, goggles and masks cannot be shipped from the Chinese mainland to Hong Kong.

Other items including walkie-talkies, drones, chains, torches, binoculars and remote-controlled toys are also restricted, they said.

“There are extra checks on everything going into Hong Kong now, so we tell customers to expect delays. The main problem is black clothing,” said an agent for a courier company. “Even navy, or other dark colours, are not allowed.”

There was widespread scorn for the new regulations among the protesters, who feel chief executive Carrie Lam’s government is tone deaf to their demands.

“This is so typical of the government. They ignore the real issues and come up with something totally superficial that does not even start to consider the reasons for so much discontent,” said David Leung, a finance industry worker.

“Who cares what colour shirts we wear? We want real elections, we want the police held to account for their brutality. The colour of our clothes is not relevant. The demands stay the same,” he said.

While Mrs Lam has withdrawn the controversial extradition Bill which sparked the protests, she has repeatedly rejected other demands: universal suffrage, an inquiry into police use of force and an amnesty for arrested demonstrators.

The move to tighten imports comes after 18 weeks of escalating turmoil and there is no road map in sight to help navigate the city out of the crisis. Hong Kong’s legislative council is in disarray – with at least a dozen pro-democracy politicians hauled out of the chamber on Thursday after shouting down Mrs Lam for the second day in a row.

She was unable to deliver her annual policy address on Wednesday as opposition legislators chanted slogans and hurled abuse, forcing her to deliver the speech by video later on.

It was the first meeting to be held in the legislative chamber after renovations, since it was ransacked by protesters on July 1st. As the crisis deepens and the city heads towards recession, scores of legislative proposals await chamber debate.

In the latest brutal attack, a prominent pro-democracy activist was set upon on Wednesday night by men with hammers and spanners.

Civil Human Rights Front leader Jimmy Sham is recovering in hospital after being attacked on his way to a meeting. He was also attacked in August by two masked men with a knife and a baseball bat. His organisation is responsible for many of the largest peaceful protests organised in recent months.

Thursday night he said from hospital that he would “continue to fight for the [protesters’] demands in a peaceful, rational and non-violent manner”.