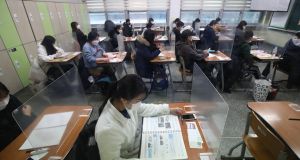 More than 64.5 million cases of coronavirus have been recorded worldwide with more than 1.4 million deaths, according to the latest data from Johns Hopkins University.

The US has recorded its deadliest day ever, with Covid-19 fatalities reaching more than 2,700 to surpass the previous peak in April, according to data compiled by Johns Hopkins University. The total death toll in the country is at more than 273,000, the most of any nation, as hospitals in some regions are approaching capacity. The Rust Belt, New York and California are likely to drive up the pace of Covid-19 deaths in coming weeks as the US approaches 300,000 fatalities, based on a forecast from the University of Massachusetts Amherst’s Reich Lab.

Americans are now bracing for a surge in Covid-19 cases following the Thanksgiving holiday weekend, as the number of people hospitalised hit an all-time high on Wednesday.

More than 100,000 people are hospitalised, according to data from the Covid Tracking Project, the highest number yet recorded, and nearly twice as many people as were hospitalised at the peak of earlier coronavirus waves in April and July.

Nearly 20,000 of those hospitalised patients are in the ICU, and at least 6,855 are on ventilators.

Meanwhile, more than 150,000 people test positive for the virus nearly every day. Currently, the seven-day average for daily new cases in the US is hovering just above 150,000, having gone slightly down after reaching a peak of 172,000 on November 25th, the day before Thanksgiving. Case numbers began to climb in mid-October and began to soar in the weeks leading up to Thanksgiving. The country breached 100,000; 150,000 and, eventually, 200,000 daily new cases for the first time in November.

On Wednesday, Dr Robert Redfield, the director of the Centers for Disease Control and Prevention, said the coming winter would be among the most challenging in the nation’s history.

President-elect Joe Biden amplified the bleak forecast during a roundtable with workers and small business owners hard hit by the devastating economic fallout of the pandemic.

“Christmas is going to be a lot harder. I don’t want to scare anybody here, but understand the facts: we’re likely to lose another 250,000 people dead between now and January,” Mr Biden said. The Biden campaign did not respond to a request for further clarity on the figures underpinning his assessment.

While the average for new cases has seemed to plateau since the middle of November, public health experts warn that an uptick in cases is probably imminent after Thanksgiving as millions of people ignored pleas to stay home and avoid mixed family or social gatherings.

In an interview with NBC on Sunday, Dr Anthony Fauci, the nation’s top infectious disease expert, outlined what the increase in travelling and gathering could mean for case numbers.

“What we expect, unfortunately, as we go for the next couple of weeks into December, is that we might see a surge superimposed on the surge we are already in,” Mr Fauci said.

Many hospitals around the country are already quickly running out of room as they deal with Covid-19 hospitalisations stemming from the uptick in cases. The mayor of the city of Los Angeles announced an emergency order directing all residents within the city to remain in their homes effective immediately.

India’s daily rise in coronavirus infections stayed below 40,000 for a fourth straight day, as 35,551 new cases took the tally to 9.53 million, health ministry data showed on Thursday. India’s daily rate has fallen since the south Asian nation reported the world’s highest such tallies through most of August and September, despite a busy festival season last month that experts had warned could trigger a spike in infections. But its tally remains the world’s second highest after the United States, where the figure is 13.7 million. Deaths in India rose by 526, taking the toll to 138,648, the ministry added.

Australia’s New South Wales state has recorded its first new case of the coronavirus in 25 days after a woman working at a quarantine hotel in Sydney tested positive. Authorities are investigating whether she became infected in the community or through work at the facility, the state health department said in a statement Thursday. The woman’s five family members were tested overnight and all returned a negative result for the virus.

Chancellor Angela Merkel said Germany will extend its partial lockdown by three more weeks as the country struggles to regain control of the coronavirus spread. Bars, gyms and cinemas will remain closed until January 10th and the government will reconvene with regional leaders on January 4th to reassess the restrictions, Dr Merkel said on Wednesday after talks with the premiers of Germany’s 16 states. Germany’s infections rates are still far too high and need to come down faster, Dr Merkel said in Berlin. Dr Merkel’s administration last week already extended a partial shutdown until December 20th while keeping schools and much of the economy open. The partial lockdown has yielded little progress in slowing the spread to levels the government has determined as manageable. Germany is conducting direct negotiations with domestic Covid-19 vaccine developers to obtain more doses than would be allocated through the shared European Union plan, health minister Jens Spahn said on Wednesday. The country is in talks with BioNTech SE, Pfizer Inc.’s partner on the first vaccine approved in a Western country against the virus, as well as CureVac NVand IDT Biologika GmbH, Spahn said. All three German companies received funding through a government program to support Covid vaccine development.

Spain will allow families to meet in groups of up to 10 on Christmas Eve, Christmas, New Year’s Eve and New Year’s Day as part of its restrictions on festive season gatherings, health minister Salvador Illa said in a news conference Wednesday. The government is seeking to strike a balance between permitting small-scale festive gatherings and combating the pandemic. The government will also restrict travel between mainland Spanish regions from December 23rd to January 6th, unless journeys are for family gatherings, he said.

Former French president Valery Giscard d’Estaing, who championed European integration and helped modernise French society in the 1970s, has died at the age of 94 after contracting Covid-19.

The UK’s quick approval of the Covid vaccine from Pfizer Inc. and BioNTech SE means Britons will get first dibs on a shot developed in two other countries - the US and Germany. Britain’s drug regulator on Wednesday cleared the vaccine for emergency use, ahead of the US Food and Drug Administration and its European Union counterpart. The government cited a rule allowing the UK to authorise a shot independently before the end of the Brexit transition period on December 31st. An accelerated review process in which regulators were able to monitor Pfizer’s trial data in real time also helped. The UK’s Medicines and Healthcare Products Regulatory Agency “has done a great job of working with the company to look at that data as it’s come through and do things in parallel, rather than one after the other as they normally would,” health secretary Matt Hancock said in a radio appearance. He also credited Brexit, though the MHRA said the speedy authorisation was conducted within EU guidelines. The European Union criticised Britain’s rapid approval of Pfizer and BioNTech’s vaccine, saying its own procedure was more thorough.

Meanwhile, Britain’s Prince Harry has suggested that the pandemic is a rebuke from nature as he called for more action to tackle climate change.

Nearly half a million South Korean students nervously began a hyper-competitive university entrance exam on Thursday, with Covid-19 students taking the exam in hospital and others separated by transparent barriers.

Australia’s pharmaceutical regulator said it is on course to review Pfizer’s vaccine by January 2021.

Eli Lilly and Co said the US government has purchased 650,000 additional doses of its COVID-19 antibody drug for $812.5 million.

Republicans and Democrats in US Congress remained unable to reach an agreement on fresh relief, although there were early signs that a $908 billion bipartisan proposal could be gaining traction as a negotiating tool.

Growth in China’s services sector accelerated in November as new business rose at the fastest pace in over a decade, while Japan’s continued to falter in November amid a resurgence in infections.

Asian shares were mixed on Thursday after a choppy day of Wall Street trade, thanks in part to a disappointing US jobs report, while the greenback languished near 2-1/2 year lows on growing optimism of a vaccine.