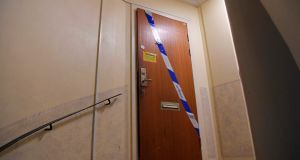 The apartment in Haninge, south of Stockholm where the man in his 40s was found injured. Photograph: Jonathan Nackstrand/AFP via Getty Images

The investigation into a 70-year-old Swedish woman detained this week on suspicion of imprisoning her adult son for nearly three decades will be closed, Stockholm prosecutors said on Thursday.

No evidence of illegal imprisonment was found in the apartment where the man in his 40s was discovered and his injuries could not be attributed to inflicted violence, prosecutor Emma Olsson told Reuters.

“Our forensic investigation of the apartment did not find signs which suggested the man was held there against his will,” she said. “No locked doors or spaces . . . or equipment for tying someone up.”

The woman, who has denied all allegations, was released from custody on Wednesday after three days of detention following the discovery of the man in the apartment by a relative.

The woman had also been suspected of causing her son grievous bodily harm after he was found with injuries, such as bruises and sores, which required hospital treatment.

But Ms Olsson said the injuries were due to the man’s ill-health and not violence. He remains in hospital, she added.

The investigation is expected to close later on Thursday, Ms Olsson said. “It’s most important now to help both of them and not look for a scapegoat,” she said. – Reuters