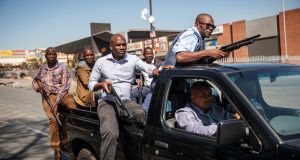 President Cyril Ramaphosa has called for an end to the xenophobic violence that has erupted in parts of South Africa in recent days, saying there is no justification for the attacks.

Addressing the nation as international business leaders and regional politicians gathered in Cape Town on Tuesday for the World Economic Forum on Africa, Mr Ramaphosa insisted his fellow countrymen must handle any grievances they have with foreigners in a democratic way.

“This violence is now mutating and taking different forms that represent themselves in a way that we do not want to see in South Africa, where communities seem to be attacking one another. We want this to stop immediately,” he said in a video posted on his Twitter account.

Since late last week mobs of protesters and looters have descended on central business districts in Gauteng Province, robbing foreign-owned shops, attacking their owners and setting buildings and vehicles alight.

The violence began in Pretoria on Thursday when protesting taxi drivers who were intent on clearing drug dealers out of the city centre began to rob and burn shops owned by African migrants.

But the unrest spread to downtown Johannesburg on Sunday and then to surrounding areas such as Jeppestown the following day, where many migrants from Nigeria and the Democratic Republic of Congo have set up small businesses.

The police have repeatedly fired tear gas, rubber bullets and stun grenades at rioters to try to quell the unrest, which has led to more than 110 arrests and two fatalities so far, according to eNCA, a local television station.

In the past few months South Africa’s government has come under criticism for failing to acknowledge that attacks on foreigners amounted to xenophobia. Instead, they have been called criminality and lawlessness by several ministers.

This criticism continued on Monday when a number of migrants caught up in the mayhem lambasted South Africa’s handling of the situation.

The Nigerian government said the attacks against its people were unacceptable and announced it was sending an envoy to South Africa “to express Nigeria’s displeasure over the treatment of her citizens; and to get assurance of the safety of their lives and property”.

Nigeria’s high commission in South Africa also described the situation as “anarchy” and called on its citizens to come forward to report what has happened to them.

The outbreak of violence is reminiscent of similar attacks against migrants that occurred in South Africa in 2008 and 2015. In 2008 at least 60 foreigners were killed by mobs over a few weeks, while in 2015 seven African migrants were murdered.

Migrants are often seen as competition for scarce jobs and government services in South Africa, where the official unemployment rate is 27.6 per cent, although it is much higher among the nation’s youth.

While the situation was calmer on Tuesday, the spate of violence has proved hugely embarrassing for the South African government, which is trying to attract foreign investment at the World Economic Forum on Africa this week.