Fight for second Brexit referendum not over yet, say campaigners 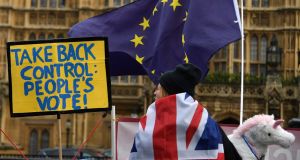 Pro-EU campaigner attends a rally outside of the parliament in London. Photograph: Andy Rain/EPA

Proponents of a second EU referendum are urgently trying to fight back against the impression that the plan might be doomed after a series of setbacks, arguing that it will gain renewed support as other options fall away.

A proposed cross-party amendment to Theresa May’s Brexit plan calling for a “people’s vote” was ditched due to limited support days before Tuesday’s Commons votes. MPs then dismissed other amendments aimed at giving the Commons more control over the process.

While conceding some damage, proponents insist that if Mrs May is unable to forge a consensus, the looming prospect of a no-deal Brexit could focus minds.

“We know it’s often people’s second-best choice, not their first choice, so people will only come to it when other alternatives have been exhausted,” said Caroline Lucas, the UK’s Green party MP. “We’re getting closer to the moment where what will be on the table is either no deal or a people’s vote, and at that point I think we’ll see a lot more people coming in.”

The campaign, which from a standing start last year managed to mobilise hundreds of thousands to march through London, has faced inflated expectations and the perhaps inevitable over-reach and disorganisation that comes from a loose alliance of several groups.

The people’s vote amendment was pulled after MPs including Labour’s Chuka Umunna and the Conservatives Anna Soubry and Sarah Wollaston concluded it could never pass without official Labour backing.

The Labour leadership had been infuriated the week before when the people’s vote campaign used the day of a no-confidence motion against Mrs May’s government to unveil a new group of supportive Labour MPs at a photocall. Labour policy is still that a second referendum is simply one of several Brexit options.

”I can’t tell you how disappointed I am in Labour MPs I know who agree with me on the disaster Brexit will potentially be, and they are going along with it,” said Soubry. “They’ve put their heads in the sand and they’ve left their backbones at home.”

She was equally vehement about some fellow Tories. “They’ll pat us on the back and say ‘keep going’, and you think: when the frig are you going to put your head over the parapet?”

But a Labour source said campaigners had been over-hasty. “You’ve got to be conscious of the numbers, as Tuesday showed. If you’ve got Labour MPs who are worried about just being seen to delay Brexit, they’re not ready to back a second referendum yet.”

Some Labour MPs are sceptical more generally. Stephen Kinnock, who favours a Norway-style departure from the EU, said he worried that a new referendum would make a no-deal option seem legitimate.

“Parliament cannot in all good conscience facilitate a process that could potentially lead to a referendum with no-deal on the ballot paper, because in doing so we would be playing Russian roulette with the jobs and livelihoods of our constituents,” he said.

Efforts are being fought on a series of fronts. The main People’s Vote group is the public-facing arm, organising events such as the London march and celebrity rallies. There are also more targeted spin-off groups such as Scientists for EU and the youth-focused Our Future Our Choice.

The mixture, coupled with a cross-party batch of occasionally outspoken MPs, can make coordination tricky, and several events have taken place at parliament without the knowledge of the campaign HQ. “It is trench warfare, and you do occasionally have to call people back from forays into no-man’s land,” said a source.

There is also Best for Britain, the semi-detached, Gina Miller-founded group which focuses on the granular work of petitioning individual MPs – more specifically, the 10 or 15 MPs each from Labour and the Conservatives seen as potentially persuadable.

One example is Labour’s Jim Fitzpatrick, who defied party whips on Tuesday to vote against Yvette Cooper’s amendment intended to stop no deal. Best for Britain has mobilised Brexit-wary groups in his Poplar and Limehouse constituency ranging from individual curry restaurants concerned at post-Brexit immigration rules to Canary Wharf banks. A source said the aim was for Mr Fitzpatrick to receive “200 or 300 postcards a week”.

The likely truth is that with the Brexit process so uncertain, especially amid speculation about an extension of the departure deadline, no one can reliably predict what will happen.

Among the more eye-opening ideas floated is that of a second referendum being adopted by the one person who could perhaps deliver it: Theresa May. Among the prime minister’s meetings after her Brexit deal was defeated was one with the Liberal Democrats, at which a second referendum was discussed. One source said that while Mrs May was obviously sceptical, she engaged at length in the mechanics of how such a vote could take place.

“The mood in the room wasn’t entirely negative,” the source said. “And you never know, if she finds she has zero chance of getting her deal passed by MPs, the idea of a 50-50 chance in a referendum might start to seem more appealing.”– Guardian