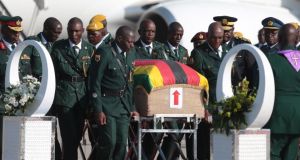 Members of Zimbabwe’s presidential guard with the coffin containing the body of Robert Mugabe, upon its arrival in Harare International airport. Photograph: Aaron Ufumeli/EPA

The body of Zimbabwe’s first post-independence leader, Robert Mugabe, arrived in his home country on Wednesday, amid ongoing uncertainty about where his remains will be buried.

The former president, who was ousted from power in November 2017 by the ruling Zanu-PF party following a military coup, had been receiving medical treatment in Singapore, when he died late last week, aged 95.

The delegation repatriating Mr Mugabe’s remains back to Zimbabwe on a chartered flight was met at Robert Mugabe International Airport in Harare by president Emmerson Mnangagwa, a large entourage of government and army dignitaries, tribal chiefs and members of the wider family.

Mr Mugabe’s body was then taken from the airport to his private Harare residence, known as Blue Roof, where an overnight wake was scheduled to take place.

On Thursday and Friday Mr Mugabe’s remains are due to lie in state at Rufaro Stadium, in the capital’s Mbare township, the venue where he was sworn in as Zimbabwe’s first black prime minister after independence was secured from Britain in 1980.

His official state funeral is scheduled to take place on Saturday at the 60,000-seat National Sports Stadium in Harare. Dozens of leaders from across the continent are expected to attend the service to pay their respects.

The burial is expected to take place the following day, but the location of his final resting place still remained unclear on Wednesday evening.

Local media have reported that the government wants Mr Mugabe to be buried at the National Heroes Acre in Harare, where many of his war of independence comrades have been buried over the years.

But his family has insisted he wanted to be buried in his home village of Zvimba, which is about 110km west of Harare, with only close relatives in attendance.

Mr Mugabe is said to have remained bitter at the manner in which Mr Mnangagwa and his supporters in Zanu-PF ousted him from power. Friends and close associates have maintained he did not want his death exploited for political gains by those responsible for his downfall.

On Wednesday Mr Mnangagwa called on Zimbabweans to come out in large numbers on Saturday to pay their respects and “show their love” for the man who was central to paving the way for their independence from colonial rule.

However, Zimbabweans are divided over how they should mourn Mr Mugabe, as he is seen as both a liberator and a dictator who eventually brought his country to its knees.

His style of governance ensured that those who opposed him feared for their lives, while his mismanagement of the economy prompted millions of Zimbabweans to leave the country due to hyperinflation, mass unemployment and chronic shortages of basic foods and medicines.