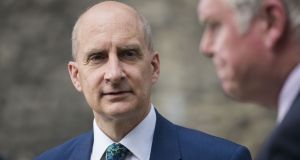 Andrew Adonis: ‘Once the treaty is rejected and there can’t be a no deal, it is inevitable that there will be another referendum.’ Photograph: John Phillips/Getty Images 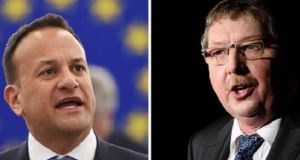 DUP MP Sammy Wilson (R) said talk about the backstop ‘is little more than a con trick” and warned that ‘it will backfire on your economy.’ Photographs: AFP/Getty Images.

DUP representative Sammy Wilson has accused the Taoiseach Leo Varadkar of “trying to out Sinn Féin Sinn Féin” in his “hardline” stance on Brexit.

The comments come as president of the European Council Donald Tusk urged EU leaders not to give up on reaching a Brexit deal as British prime mininster Theresa May said Britain and the EU were “not far apart” on the Northern Ireland backstop.

Downing Street confirmed Tuesday night that the prime minister would address EU leaders before dinner at a summit on Wednesday evening.

Ms May blamed the impasse on the EU’s insistence that there should be a Northern Ireland-only backstop in the withdrawal agreement as well as a UK-wide customs backstop in the political declaration on the future relationship between Britain and the EU. The two sides also disagree about whether the backstop should be time-limited, as Britain wishes.

DUP leader Arlene Foster has strongly reiterated her view that Northern Ireland must leave the EU on exactly the same terms as the rest of the UK.

Mr Wilson told RTÉ’s Today with Sean O’Rourke show that talk about the backstop “is little more than a con trick” and warned that “it will backfire on your economy.”

He asked what would Irish businesses say when they find that they have no access to the British market. “Some businesses will ask what kind of leadership was that?”

The DUP representative for East Antrim said there is no need for a hard border and that the threat of difficulties in trading were “something dreamt up as a problem by the EU and Ireland to try to keep with UK within the single market.”

On the issue of who is going to lose out in the event of a no deal, Mr Wilson said that food producers in the Republic were far more dependent on the Brisith market.

On the same programme, Fianna Fáil Brexit spokesperson Lisa Chambers denied that the Border issue is “a con job.”

“It is not something that was dreamt up overnight. The Border is a real issue, it will not be taken off the table because the DUP wants to.

“Every party agrees that no deal would be catastrophic for both sides of the island.”

She said the business community in the North is fearful that the DUP is “playing the Orange card. We would all like to see Brexit not happen, to avoid the cliff edge of a no deal Brexit.”

Meanwhile a former British Labour cabinet minister has it is inevitable that there will be another Brexit referendum, while a Tory MP says the question must be put to the people once again.

Conservative MP Anna Soubry says the Brexit negotiations are “a terrible mess” the issue should be put to the British people for a second time in the form of another referendum.

Ms Soubry said the British people were told “fibs” and voted yes in the Brexit referendum because of notions of lost sovereignty and perceptions about immigration “that had diddly squat” to do with the EU, she told RTÉ’s Morning Ireland.

“This issue was never properly discussed and has had profound consequences. The issue should never have been put to the British people in the first place.”

She also said there could not be a time limit of a back stop which is meant to come into place “if we don’t get a magic trade deal”.

The backstop agreement was made by Ms May, she said, but then certain cabinet colleagues and the DUP “would not have it. They don’t even represent the majority in Northern Ireland.”

She said the United Kingdom is being run “by a small number of people who don’t represent the majority of people - the DUP and the hard Brexiteers.

Former Labour cabinet minster Andrew Adonis, who is predicting a second referendum, said that when faced with the option of staying in the EU or going with whatever deal is negotiated by Ms May, the DUP “will vote with her.”

Speaking on Newstalk Breakfast, Mr Adonis said the the British parliament will not allow a no-deal scenario saying “there is a big difference between talks breaking down and there being no deal next March. There are talks every day.”

He warned that the prime minister cannot appease both sides within the Conservative party and will find it difficult to agree a treaty.

Mr Adonis said Ms May is facing not just resistance from the DUP, but also from a third of her own party led by Boris Johnson and Jacob Rees Mogg.

“These people will reject her treaty. Once the treaty is rejected and there can’t be a no deal, it is inevitable that there will be another referendum - to either stay (in the EU) or to accept her treaty.

“Some Conservatives will rally to support her and I think the DUP will vote with her. It will be a case of stay in or her deal.”