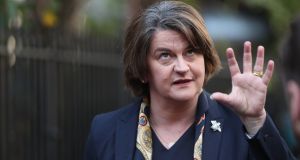 DUP leader Arlene Foster: “I fully appreciate the risks of a ‘no deal’ but the dangers of a bad deal are worse.” Photograph: Niall Carson/PA Wire

Arlene Foster is playing the Orange card as the Brexit negotiations may or may not be reaching endgame, amplifying the threat posed by the frequently mentioned “border down the Irish Sea”.

Talk of compromise and backstops and “regulatory” checks of goods from Britain destined for the North, no matter how gently expressed by Michel Barnier, just does not wash with the DUP.

It is not yet quite clear how much traction this “no surrender” gambit has gained. Many unionist businesspeople openly fear a no-deal Brexit. Others accept a compromise Brexit threatens Northern Ireland’s place in the union with Great Britain.

Foster, as part of her dialogue with Leo Varadkar and Micheál Martin in Dublin on Monday, would have repeated such warnings but mainly this message is for her Northern Irish and English audiences.

And it’s been relentless over recent days. Northern Ireland voted 56 per cent remain against 44 per cent leave, and it is apparent based on demographics that more unionists than nationalists chose to quit the EU.

But still a significant number of unionists would have opted to stay in the EU, perhaps even some DUP supporters and maybe, just maybe, some of their senior politicians.

For instance, former DUP minister Simon Hamilton is believed to have voted to remain. When asked how he voted, he always dodged the query, leading to the reasonable supposition that he would prefer to stay in than out.

But on Brexit he and the rest of the party are presenting a unified front. No one has gone Awol.

In an article in Saturday’s Belfast Telegraph, Foster struck one conciliatory note. “We want a deal which respects Northern Ireland’s constitutional position but one that also works for our nearest neighbours in the Republic of Ireland,” she wrote.

Anyone doubting her resolve should think carefully, she made clear. “This is no game,” she said.

Last week, however, one of her MPs, David Simpson for Upper Bann, acknowledged that if there were no deal, it “would decimate the Northern Ireland lamb industry overnight, given that we export 90 per cent of our lamb”. That’s a general line from business.

Regardless of this admission from one of her own MPs, Foster, who mentioned Margaret Thatcher in her article, was not for turning. “I fully appreciate the risks of a ‘no deal’ but the dangers of a bad deal are worse,” she wrote.

And her party was fully with her, she was certain, “in standing firm not just for Northern Ireland but for the union”.

Some unionist businesspeople, such as sheep farmer Campbell Tweed, a former head of the Ulster Farmers’ Union, and Trevor Lockhart, head of the Fane Valley agribusiness group and also chairman of the Confederation of British Industry in Northern Ireland, have urged caution.

The prudent response, said Needham, was to run with any compromise that the UK prime minister Theresa May might extract from Michel Barnier and the EU. The alternative was no deal, he added, which would be “utterly catastrophic for Northern Ireland” and could in fact lead to the “likely break-up sooner or later of the United Kingdom”.

A businesswoman rang in to say that the stance of the DUP was not only threatening her kelp-producing enterprise on Rathlin Island but, as Needham said, undermining the actual union.

That didn’t work with Wilson, who ratcheted up the emotional language: “People in Northern Ireland died to remain part the United Kingdom and not be forced out by terrorists,” he said.

The businesswoman was unimpressed: “If you want to drive forward a united Ireland, boy, you’re doing a great job of it,” she said.

The DUP has support from the Ulster Unionist Party and its leader, Robin Swann, who said many remain-voting unionists feared the backstop would “diminish their place within the United Kingdom”.

Privately the DUP argues that the “hyping” is being done by Brussels and Dublin, not by it, and that a more reasonable attitude from both would ensure that the UK as a whole could exit Europe without any form of hard border.

So once again Northern Ireland is back on board that trusty vessel, brinkmanship. What happens next is hard to fathom. Without a compromise, however, the craft looms close to the rocks.

Some nationalists argue that the DUP is bluffing and that bluff should be called. “Bluff?” queried Nigel Dodds in Monday’s Daily Telegraph. “We don’t gamble with the union.”