Trump: ‘Answers will be forthcoming’ over vanished Khashoggi 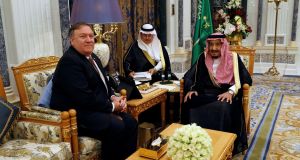 US president Donald Trump has again appeared to give Saudi Arabia the benefit of the doubt in the deepening diplomatic crisis over disappeared journalist Jamal Khashoggi.

Mr Trump said that during a phone call on Tuesday Crown Prince Mohammed bin Salman had “totally denied any knowledge of what took place”. The crown prince told him he had “already started, and will rapidly expand, a full and complete investigation into this matter,” said Mr Trump. The president added: “Answers will be forthcoming shortly.”

The conversation took place as secretary of state Mike Pompeo met the crown prince, King Salman and senior Saudi officials in Riyadh on Tuesday. The State Department said Mr Pompeo had called for a “thorough, transparent and timely” investigation during the discussions.

“I hope you are comfortable here?” the king asked Mr Pompeo, according to reporters. Mr Pompeo responded, “thank you for accepting my visit on behalf of President Trump”.

Mr Trump dispatched the secretary of state to meet the king over the case that has strained the US relationship with the Saudis, carefully cultivated by the president.

Mr Pompeo’s visit took place amid reports that the Saudi regime was preparing to announce that Khashoggi was killed accidentally by “rogue” Saudi agents at the consulate in an act that was not sanctioned by the regime.

That account would contradict statements made in the days following the journalist’s disappearance. The Saudi crown prince publicly said in an interview with Bloomberg on October 3rd that he believed Khashoggi had left the consulate in Istanbul alive.

Mr Pompeo is expected to fly to Ankara on Wednesday for a meeting with senior Turkish officials about the disappearance of the dissident journalist who has not been seen since entering the consulate in Istanbul on October 2nd.

Turkey’s president, Recep Tayyip Erdogan, told reporters in the capital on Tuesday that investigators who searched the consulate on Monday and Tuesday were looking into “toxic materials, and those materials being removed by painting them over”.

Reports emerged that investigators were preparing to search the residence of the Saudi consul Mohammed al-Otaibi who reportedly flew out of Turkey on Tuesday.

In Washington, senior members of Congress continued to put pressure on the White House to take action. Republican senator Lindsey Graham, who is close to Mr Trump, accused the crown prince of ordering the journalist’s murder and referred to him as a “rogue crown prince”, who is jeopardising relations with the United States.

Many members of Congress, which has long had a testy relationship with ally Saudi Arabia, have issued strong criticism of the kingdom since Khashoggi’s disappearance.

Mr Graham attributed blame directly to the crown prince, who is known by his initials, MbS. The senator said he planned to share his views with the president and advocate suspending arms sales.

For the record, I have no financial interests in Saudi Arabia (or Russia, for that matter). Any suggestion that I have is just more FAKE NEWS (of which there is plenty)!

“Nothing happens in Saudi Arabia without MbS knowing it,” he said in an interview with Fox News.

“I’ve been their biggest defender on the floor of the United States Senate,” said Mr Graham. “This guy is a wrecking ball. He had this guy murdered in a consulate in Turkey and to expect me to ignore it. I feel used and abused. The MbS figure is to me toxic. He can never be a world leader on the world stage.”

Senate majority leader Mitch McConnell struck a more cautious tone. He characterised Khashoggi’s disappearance as “extremely disturbing”, but added “clearly we need to find out what happened before deciding what action should be taken. I can’t imagine if what we think happened, that we would take no action.”

Saudi Arabia denies it had any role in the journalist’s disappearance. But last week 22 senators triggered a US investigation of whether sanctions should be imposed over the disappearance.

Mr Trump has taken a less aggressive stance toward the Saudis, suggesting on Monday after speaking with King Salman that perhaps “rogue killers” were behind the journalist’s disappearance. Khashoggi has been a sharp critic of the crown prince.

“Well this is not rogue killers, this is a rogue crown prince,” said Mr Graham in a separate interview with Fox News Radio. “I would suspend arms sales as long as he is in charge.” He said that while King Salman is revered in Saudi Arabia, the crown prince “is pulling the levers there”.

Senator Graham said he did not know what Mr Trump was going to do about the Khashoggi incident. But he was certain of his own position on the matter. “I know what I’m going to do. I’m going to sanction the hell out of Saudi Arabia.”

He questioned why the crown prince would put Saudi Arabia’s strong backers, especially Mr Trump, in a bad spot and said, “this guy’s gotta go”.

Meanwhile, Saudi Arabia is preparing to acknowledge the death of Mr Khashoggi in a botched interrogation, CNN and the New York Times reported on Monday, after Mr Trump’s “rogue killers” speculation.

Khashoggi, a US resident, Washington Post columnist and leading critic of the powerful Saudi crown prince, vanished after entering the Saudi consulate in Istanbul two weeks ago to get marriage documents. Turkish officials say they believe he was murdered there and his body removed.

Members of his family have called for an investigation, in a statement released on Monday. “We are sadly and anxiously following the conflicting news regarding the fate of our father after losing contact with him two weeks ago,” they said.

“The strong moral and legal responsibility which our father instilled in us obliges us to call for the establishment of an independent and impartial international commission to inquire into the circumstances of his death.”

Citing two unidentified sources, CNN said on Monday that Saudi Arabia is preparing a report that would acknowledge Khashoggi was killed as the result of an interrogation that went wrong.

“I heard that report, but nobody knows if it’s an official report,” Mr Trump told reporters, without elaborating.

The New York Times, citing a person familiar with the Saudi plans, reported the crown prince had approved an interrogation or rendition of Khashoggi back to Saudi Arabia. The Saudi government, it said, would shield the prince by blaming an intelligence official for the bungled operation.

The case has provoked an international outcry against Saudi Arabia, the world’s top oil exporter, with more media and business executives pulling out of a planned investment conference there this month.

As the crisis unfolds more senior figures pulled out from this month’s investment forum in Riyadh. On Tuesday, the chief executives of HSBC, Standard Chartered , Credit Suisse and the London Stock Exchange , as well as the chairman of BNP Paribas withdrew. The White House indicated that a decision would be made about whether Steve Mnuchin will attend the conference by the end of the week. While organisers have said the conference will go on, the Saudis cancelled an annual diplomatic reception in Washington set for later this week.

Turkish authorities have an audio recording indicating that the journalist was killed in the consulate, a Turkish official and a security source told Reuters, and have shared evidence with countries including Saudi Arabia and the United States. They provided no further details.

Saudi Arabia has strongly denied killing Khashoggi and has denounced such assertions as “lies”, saying he left the building shortly after entering.

“The king firmly denied any knowledge of it,” said Mr Trump. “He didn’t really know, maybe. I don’t want to get into his mind, but it sounded to me – maybe these could have been rogue killers. Who knows?”

The US president gave no evidence to support the theory. Democratic politicians criticised Mr Trump for using the term “rogue killers”.

Mr Trump has threatened “severe punishment” if it turns out Khashoggi was killed in the consulate, although he has ruled out cancelling arms deals worth tens of billions of dollars with Saudi Arabia. European allies have urged “a credible investigation” and accountability for those responsible.

Mr Trump tweeted that he had “no financial interests in Saudi Arabia”. But during a campaign rally in 2015 he said of the Saudis: “I get along great with all of them. They buy apartments from me. They spend $40 million, $50 million. Am I supposed to dislike them? I like them very much.’”

A pro-government Turkish daily published preliminary evidence last week from investigators who it said had identified a 15-member Saudi intelligence team that arrived in Istanbul on diplomatic passports hours before Khashoggi disappeared.

Saudi Arabia has responded to Western statements by saying it would retaliate against any pressure or economic sanctions “with greater action,” and Arab allies rallied to support it. – Additional reporting Reuters