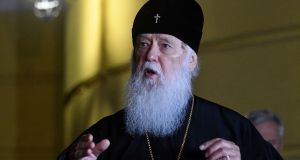 Patriarch Filaret has called for Ukraine’s churches to unite and choose one leader. Photograph: Genya Savilov/AFP

Ukraine is poised to create a national Orthodox church that is independent of Russia, after a Holy Synod in Istanbul made historic rulings in Kiev’s favour despite warnings of unrest and bloodshed from Moscow.

Ukrainian president Petro Poroshenko appealed in April to Ecumenical Patriarch Bartholomew of Constantinople – traditionally the “first among equals” in the Orthodox world – to grant independence to his country’s church, which is currently split between rival patriarchates that are loyal to Moscow and Kiev.

The split occurred after a sovereign Ukraine emerged from the Soviet Union in 1991, and animosity between the two patriarchates has soared since Russia annexed Crimea and fomented war in eastern Ukraine in 2014.

Many Ukrainians see church independence – or autocephaly – as a crucial step towards ending centuries of domination by Moscow, but the Russian church says it would split the Orthodox world and fuel violence in Ukraine.

On Thursday, the synod decreed it would “renew the decision already made that the Ecumenical Patriarchate proceed to the granting of autocephaly to the Church of Ukraine”.

It also formally reinstated Patriarch Filaret of the Kiev Patriarchate and Metropolitan Makariy of the small Ukrainian Autocephalous Orthodox Church, whom Moscow excommunicated.

The synod also revoked a 1686 letter in which Constantinople transferred Kiev’s church to Moscow’s jurisdiction, and which Russia has subsequently used to claim religious primacy over its neighbour; in doing so, the Ecumenical Patriarch is trying to take Ukraine back under its wing and out of the Russian Orthodox Church’s orbit.

“There will be a national, autocephalous, Orthodox Church of Ukraine!” Mr Poroshenko declared on Thursday evening.

Patriach Filaret said Ukraine’s churches must now unite and choose one leader, who will then formally receive the tomos, or decree, of autocephaly from the Ecumenical Patriarchate.

The Russian Orthodox Church accused the Ecumenical Patriarchate of “legalising schism”, making “catastrophic decisions” and an “unprecedented anti-canonical act”; earlier, Moscow warned that ecclesiastical independence for Ukraine would trigger clashes over possession of its major monasteries.

Mr Poroshenko said only “Moscow’s agents” would cause such violence.

“I think it is something where the aspirations of Ukraine and the Ukrainian people should be respected,” US special envoy to Ukraine Kurt Volker said on Thursday. “I hope that there are not protests and violence orchestrated as a result of this decision. I think it would be tragic to see that.”