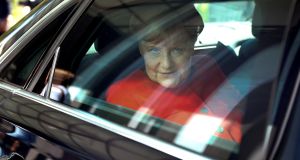 German chancellor Angela Merkel has said she sees no possibility for deepening EU co-operation with Ankara at present as the rule of law no longer exists in Turkey.

In a summer press conference that ran the gamut from African human traffickers to German school toilet renovations, a bleary-eyed Dr Merkel insisted she still had enough “energy, curiosity and joy” to run for a fourth term after Germany’s September 24th election.

In a press conference dominated by foreign policy, Dr Merkel said relations with Ankara have become “particularly complicated”, with Berlin’s concerns over the presidential referendum followed by mass detentions of German citizens in Turkish prisons.

“I would wish for better relations but that has to do with adhering to rule of law principles, something we don’t see in Turkey at the moment,” she said.

Brussels is threatening to revoke Warsaw’s EU voting rights in a long-running standoff over reforms of court appointments and practices. Warsaw’s national conservative government says its reforms are about making courts more efficient and democratic and, in a letter to the commission this week, “in line with European standards”.

Critics see the reforms as part of a longer-term plan to make judges, and all other independent instances in Poland, beholden to the government.

“I take this very seriously,” said Dr Merkel. “As much as I wish good relations with Poland, our neighbour, we cannot keep our mouth quiet and say nothing just to keep the peace.”

On the future of the EU, the German leader said she backed plans to turn the European Stability Mechanism crisis fund into a full-blown European Monetary Fund.

“It’s a good thought that would create more stability and show the world that we have all the mechanisms in our portfolio to react to unexpected situations,” she said.

EU economic sanctions against Russia would be lifted, Dr Merkel said, “when the cause of the sanctions is lifted, namely that Ukraine doesn’t have full sovereignty in its eastern regions”.

She hoped Russia’s “flagrant breach” of territorial integrity over Crimea would not be repeated elsewhere, such as in the Baltics.

With debate over the refugee crisis looming large in Germany’s election debate, Dr Merkel denied hardening her refugee line for party political purposes. Her priority was to focus on root causes of economic migration and push for fairer distribution across the EU.

“Either we [in Europe] show solidarity with countries like Italy and Greece or this will have grave impact in the future,” she said.

She attended a meeting in Paris on Monday evening with leaders from France, Germany, Italy and Spain as well as Chad and Niger and one of Libya’s leaders. Among the measures proposed were EU funds to create jobs, assist with border policing and provide “humane care” in Libya.

In Berlin on Tuesday, Dr Merkel insisted that a plan to review asylum claims in Chad or Niger was about tackling human trafficking across the Mediterranean Sea, not pushing the refugee crisis back into Africa. She also raised the prospect of agreeing legal contingents of African migrants who want to study or work in Europe.

“We cannot shut ourselves off and continue as before,” she said. “We can only live in prosperity and security when we look beyond the end of our noses and deal with our neighbours and their economic development. That’s the thought that guides us,” she said.

As the election campaign heats up, and refugee integration and security concerns boost the far-right AfD in her native eastern Germany, Dr Merkel dismissed the party as “racist” for launching a broadside against her Turkish-German integration minister.

Aydan Özoguz has come under fire from the AfD for saying the party’s demands for recognition of a “leading German culture” ignore how German historical development, as a collection of kingdoms belatedly unified in 1871, offered little by way of a cultural common denominator beyond the German language.

At the weekend, AfD campaign co-leader Alexander Gauland suggested Ms Özoguz, born in Hamburg to Turkish parents, should be “disposed of in Anatolia”.

“The remarks about minister of state Özoguz are racist and are to be condemned completely,” said Dr Merkel. “They for themselves, and speak volumes about the person making such abusive remarks.”