London Letter: EU signals no role in talks for Stormont, that London must make decision 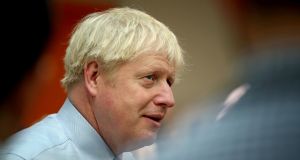 Downing Street left much of Westminster bewildered on Thursday with an update on talks with Brussels over finding an alternative to the Northern Ireland backstop.

“We have been having detailed discussions with the commission’s Taskforce 50 in recent weeks. We have now shared in written form a series of confidential technical non-papers which reflect the ideas the UK has been putting forward. We will table formal written solutions when we are ready, not according to an artificial deadline, and when the EU is clear that it will engage constructively on them as a replacement for the backstop,” said a Downing Street spokesman.

No 10 made clear later that a non-paper meant that whatever was proposed did not represent the British government’s formal position.

Until now, Boris Johnson has been reluctant to share a written proposal with EU negotiator Michel Barnier because he knows it would be shared immediately with the 27 remaining member states. Downing Street fears that if it puts forward a compromise too early it will be pulled apart at Westminster so that the government will be unable to assemble a majority behind any withdrawal deal.

The mood at Westminster was upbeat at the start of this week until Jean-Claude Juncker and Michel Barnier made clear to Johnson over lunch in Luxembourg on Tuesday that the EU’s red lines remain firm. DUP leader Arlene Foster boosted expectations of a deal on Wednesday when she signalled her party’s willingness to consider regulatory alignment with the EU in areas beyond the agrifood sector.

But Brexit secretary Stephen Barclay’s aggressive, intimidatory speech in Madrid, when he warned Spain and Ireland about the price they would pay for a no-deal Brexit, stopped the stampede towards optimism in its tracks. Barclay repeated the Johnson administration’s bogus claim that the backstop contravenes the Belfast Agreement, suggesting that every decision about Northern Ireland’s future must be subject to a parallel majority with approval from both communities.

The UK supreme court has ruled that the principle of consent in the Belfast Agreement applies only to the question of whether Northern Ireland should remain part of the UK or join a united Ireland. And since the decision to leave the EU was not backed by both communities and was rejected by a majority in Northern Ireland, the arrangements that follow Brexit can hardly be expected to meet a different standard.

There are three central elements to any alternative to the backstop: regulatory alignment; customs; and the role of the Stormont institutions in approving future changes to EU regulations that would apply to Northern Ireland.

Johnson’s proposal for an all-island regime for agrifoods was an important first step on regulatory alignment and Foster’s reference this week to her August 2016 joint letter with Martin McGuinness implies a willingness to expand such alignment to the limited areas of the single market identified in the withdrawal agreement.

It is obviously for the British government itself . . . to ensure that it has the support of the Northern Irish institutions

The EU’s March 2018 proposal for a Northern Ireland-only backstop said that Northern Ireland should be considered part of the EU’s customs territory and must abide by its customs code. But it did not demand that the North should be part of the EU customs union, a distinction that could offer diplomats scope for finding a solution that will satisfy unionists’ concerns about sovereignty.

Michel Barnier said this week that the EU had “heard the questions and remarks made by the British prime minister on the democratic, or non-democratic, character of the backstop”. But he made clear that the EU would not negotiate directly with Stormont and that the devolved institutions in Northern Ireland could not have a veto on EU regulations.

“It is obviously for the British government itself – who will sign the withdrawal agreement on behalf of the whole United Kingdom – to ensure that it has the support of the Northern Irish institutions,” he said.

It remains open to the British government to propose a mechanism whereby the Stormont institutions could reject future changes to EU regulations that would apply to Northern Ireland. But it would be for London rather than Stormont to determine what action to take and for the EU to decide on the consequences of such an action for its relationship with the UK as a whole.