London Letter: the new Brexit plan is vague, and there are some questions that nobody at Westminster or in Whitehall can answer

British prime minister Boris Johnson has told MPs he has made a “genuine attempt to bridge the chasm” to strike a fresh Brexit deal with the EU with his proposals to replace the backstop. Video: UK Parliament 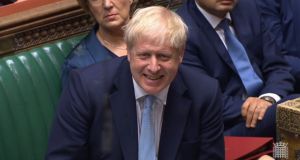 The atmosphere in the House of Commons chamber on Thursday during Boris Johnson’s statement on his new Brexit plan was unusually restrained and almost pleasant. It helped that the chamber was half empty and that illness had reduced speaker John Bercow’s voice to a feeble, intermittent croak, but it was Johnson who set the mood.

A few hours earlier he had promised his cabinet that he would adopt a tone of “glutinous emollience” towards the EU and Labour MPs. He was better than his word, answering each question with a mixture of unction and flattery, and voicing no more than disappointment in the face of a frontal attack from Jeremy Corbyn.

Downing Street no longer speaks of Johnson’s proposal as his final offer, suggesting instead that it could form the basis of a discussion with the EU. Johnson’s negotiator David Frost will be in Brussels for talks on Friday, and his European counterparts are waiting to hear how much scope there is for changing the British proposal.

Few in Brussels or in the 27 EU capitals believe the current proposals are a basis for negotiation, but nobody wants to slam the door in Johnson’s face right away. Even if the EU concludes next week that there is no basis for a deal, there may not be any formal statement to that effect.

When Theresa May unveiled her Chequers proposals last summer, the EU did not react at all at first, and it was only at the Salzburg summit two months later that her fellow leaders rejected it in the most brutal manner. May’s proposals were referred to in Britain as the “Chequers agreement”, although it had been agreed among her cabinet for only two days before David Davis walked out, followed quickly by Johnson.

There was a similar narrative taking shape at Westminster on Thursday as expelled Conservative rebels and hardcore Brexiteer holdouts lined up to show support for Johnson’s plan. With the DUP on board and some Labour MPs in Leave-voting seats making eyes at the plan, it looks possible that Johnson could win a majority for it.

When Michel Barnier briefed EU ambassadors about the proposal on Thursday they agreed that he should continue to engage with British negotiators but that the plan in its current form was not the basis for a deal. Part of the problem is its vagueness, and there are a number of questions that nobody at Westminster or in Whitehall can answer.

One is how consent in Northern Ireland for regulatory alignment with the EU can be established if the Assembly is not sitting six months before the end of the transition period, when it is supposed to make the decision. This matters because the default option could determine whether the DUP or Sinn Féin has an incentive to block the return of the Stormont institutions.

The proposal envisages that Northern Ireland would remain in the UK customs territory while Ireland remains in the EU customs union. Johnson told the House on Thursday that checks can be carried out away from the Border at traders’ premises and at various points along the supply chain.

But the British proposal acknowledges that Brexit will cause disruption to the all-Ireland economy, something the EU is determined to avoid. And Britain wants the EU to rewrite its rules on customs to create what the Europeans view as a giant loophole in their single market.

“I do not for one moment resile from the fact that we have shown great flexibility in the interests of reaching an accommodation with our European friends and achieving the resolution for which we all yearn,” Johnson told the Commons on Thursday.

“When I think of the conflicts that have wracked Europe in the past, of the immense challenges that we have together surmounted, of the 74 years of peace and prosperity we have together achieved, I believe that surely we can summon the collective will to reach a new agreement.”

He may be right, but as things stand now the resolution for which Johnson yearns will not come in October.