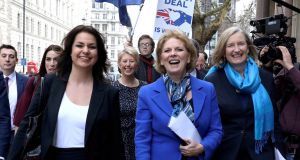 There was no more than a murmur in the House of Commons on Wednesday morning as Anna Soubry, Heidi Allen and Sarah Wollaston walked in a few minutes before Prime Minister’s Questions. But as they turned right and took their seats on the opposition benches they shattered Theresa May’s hope that she could keep the Conservative party intact despite Brexit.

Allen and Wollaston became Conservatives relatively recently, chosen as candidates in open primaries and have long been regarded by colleagues as semi-independent. But although Soubry was one of the most outspoken critics of the prime minister’s approach to Brexit, she was a Conservative through and through, having joined the party as a student in the 1970s.

Speaking at a press conference on Wednesday afternoon, Allen said she felt “excited” as she joined eight former Labour MPs in the Independent Group, and Wollaston was similarly upbeat. But Soubry choked up as she spoke about the friends she was leaving behind in the Conservative party and she was the most passionate as she described how the party had changed.

A “right wing, the hardline anti-EU awkward squad” had taken control as the party was “hollowed out” with moderates and centrists no longer feeling at home within it, she said.

The three defections have given the Independent Group a boost, making it a bigger parliamentary entity than the DUP and reinforcing the message that it is more than a refuge for disgruntled Labour MPs. The Conservative influx carries risks too, however, as Soubry showed on Wednesday when she defended George Osborne’s economic policy of austerity.

Labour seized on her remarks as evidence that the new group is nothing more than a coalition to defend the economic status quo that represents business rather than ordinary people. But both parties have been rattled by the defections because both fear that the new group has the potential to attract other unhappy MPs.

The formation of the Independent Group, all of whose members are ardent Remainers, has not changed the parliamentary arithmetic of Brexit but it changes the atmosphere ahead of crucial votes next week.

It will increase pressure on the prime minister to allow her MPs and even ministers to vote for Yvette Cooper’s amendment that could compel the government to postpone Brexit rather than leave the EU without a deal. And it will strengthen those within Labour who want Jeremy Corbyn to put his party’s weight behind the campaign for a second referendum.