May and Juncker pledge to accelerate talks

Statement reconfirmed their commitment to avoiding a hard border in Ireland 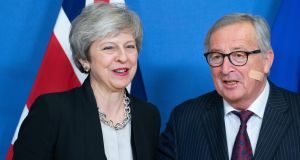 Prime minister Theresa May and Commission president Jean Claude Juncker have jointly pledged to continue with urgency their “constructive” discussion on Brexit.

Following their meeting here in a joint statement they “urged their respective teams to continue to explore the options in a positive spirit”. They said they would review progress within days “seized of the tight timescale and the historic significance of setting the EU and the UK on a path to a deep and unique future partnership”.

The statement said that they had discussed “which guarantees could be given with regard to the backstop that underlines once again its temporary nature and give the appropriate legal assurance to both sides”.

Both reconfirmed their commitment to avoiding a hard border on the island of Ireland and to respect the integrity of the EU’s internal market and of the UK. And they discussed “whether additions or changes to the political declaration can be made that are consistent with the EU and UK government positions”.

Notably, there was no reference in the statement to any question of reopening the withdrawal agreement.

The talks are largely confined to finding an agreed legal interpretation of the backstop that will allow UK attorney general Geoffrey Cox, now a pivotal figure, to tell the Commons he no longer believes the backstop to be an “indefinite” commitment for the UK.

Commission sources continue to insist there can be no common understanding, whether or not legally binding, that undermines the text of the withdrawal agreement, and they are skeptical about UK claims that the legal limits to Article 50, the EU treaty’s withdrawal provisions clause, can be the basis for such an interpretation.

UK chancellor Philip Hammond confirmed late on Tuesday that the government no longer intended to pursue alternative arrangements for the backstop in the withdrawal agreement.

A UK spokesman said the range of issues under discussion were now limited to two challenges – setting a time limit to the backstop or providing an exit mechanism for the UK.

Diplomats here say the difficult prospects of an agreement have also been complicated in recent days by the growing sense of distrust felt by EU leaders in Mrs May.

They are deeply exasperated at her inability to command a Commons majority and unwillingness to explore options that might build one by reaching out to the opposition.

Sources here suggest that even if there was a possibility of an agreement on backstop assurances, there would be a reluctance to make any concessions ahead of a demonstration by the prime minister of her ability to swing a deal with MPs.

That suspicion is also reflected in increasingly hostile attitudes to the idea of a time extension on the withdrawal talks and thus of the UK departure date of March 29th. Commission officials speak openly of the need for Mrs May to demonstrate if she asks for an extension it would produce a definitive result.

Labour leader Jeremy Corbyn will be in Brussels on Thursday to meet Mr Barnier who will also be resuming discussions with Brexit secretary Stephen Barclay and Mr Cox.

“We are saying loud and clear,” Mr Corbyn said last night, “that there is no majority for no-deal, and Labour will be working with politicians across the house to prevent a no-deal outcome which would be so damaging to our economy and communities.

“Labour respects the result of the referendum, but we do not support the prime minister’s damaging approach which is focused more on appeasing factions of her party than finding a sensible solution that works for the whole country.”