May and Juncker discuss options to break backstop logjam

President of the European Commission Jean-Claude Juncker admits that he is "not very optimistic" over whether a Brexit deal can be reached between the United Kingdom and the European Union. Video: EBS 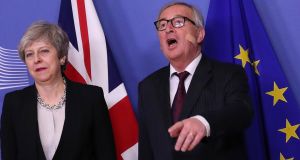 Jean-Claude Juncker and Theresa May emerged from their meeting in Brussels on Wednesday night expressing determination to accelerate their Brexit talks in the face of a tight deadline.

A joint statement from the commission president and British prime minister was significant, however, for what it did not say. While referring to a variety of options for unblocking the backstop logjam, the leaders notably did not admit to discussing any reopening of the withdrawal agreement.

That had been specifically ruled out by the EU although a spokesman for the UK was before the meeting saying Mrs May would “continue to ask for a reopening of the withdrawal agreement”.

President @JunckerEU and Prime Minister @theresa_may met to take stock of their efforts to deliver the UK's orderly withdrawal from the EU.

Although the statement refers to the possibility of “alternative arrangements” for replacing the backstop – the guarantee there will be no hard border even if future EU-UK trade talks fail – it is clear the UK focus is now almost entirely on trying to find agreed legal language on the backstop that will allow UK attorney general Geoffrey Cox reassure Commons that he no longer believes the backstop commitment in the withdrawal agreement to be “indefinite”.

Brussels diplomats and officials remain unconvinced that will be possible without undermining the backstop as an insurance policy.

Both UK Brexit secretary Stephen Barclay and Mr Cox will be in Brussels on Thursday to continue the discussions with the EU’s chief Brexit negotiator, Michel Barnier.

Mrs May meanwhile announced she intended to travel this weekend to the EU-Arab League summit in Sharm el-Sheikh which the majority of EU leaders, including Taoiseach Leo Varadkar, will attend. Diplomats say it will provide an opportunity for “speed lobbying” by the prime minister of fellow EU leaders but there will be no formal Brexit discussions.

In London, Mrs May’s woes were amplified when Tory MPs Anna Soubry, Sarah Wollaston and Heidi Allen defected to the new Independent Group over Brexit bringing its ranks to 11. They accused Mrs May of allowing hardline Brexiteers take over the Tory Party.