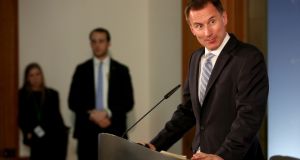 Five weeks from the UK’s scheduled EU departure, Mr Hunt used a speech in Berlin to press chancellor Angela Merkel into action, using her own Brexit arguments and logic. For good measure, he even threw in Austrian-born philosopher Karl Popper – the chancellor’s favourite political thinker.

“In the vital weeks ahead, standing back and hoping that Brexit solves itself will not be enough,” said Mr Hunt. “The stakes are just too high: we must all do what we can to ensure such a deal is reached.”

With the clock ticking, the German leader has warned that future generations will struggle to understand anything less than a constructive Brexit agreement. And she has suggested a pragmatic backstop solution can be found during the transition phase.

Last weekend she warned that a disorderly UK departure would add to growing external pressures and risked collapsing the multilateral world order into puzzle pieces.

At the Konrad Adenauer Foundation, linked to Dr Merkel’s own ruling Christian Democratic Union (CDU), Mr Hunt repeated those arguments and asked what Germany could do to prevent the chancellor’s worst-case scenarios.

“Now is the hour for the generous and far-sighted leadership of which chancellor Merkel spoke,” he told his Berlin audience. “I would urge our European friends to approach this crucial stage of the Brexit negotiations in that spirit.”

Shifting responsibility for the two-year Brexit impasse away from London, Mr Hunt said no one wanted future historians to puzzle over how “Europe failed to achieve an amicable change in its relationship with Britain”.

Rejecting Britain – “a friend and ally in every possible sense”– risked inflicting “grave and avoidable damage to our continent at exactly the moment when the world order was under threat from other directions”, he said.

In a more detailed letter ahead of his visit, Mr Hunt said the key to settling Brexit uncertainty was to change the Northern Ireland backstop sufficiently to allow Britain’s attorney general change his legal advice to parliament.

Aware German debate on the backstop is far less detailed than in the UK and Ireland, Mr Hunt warned that failure to compromise could risk millions of jobs on both sides of the English Channel.

Although UK trade with the EU is 8 per cent higher than the bloc’s trade with China, German business has yet to break ranks with Dr Merkel or Brussels. As well as smooth trading, Mr Hunt reminded his audience that only a smooth exit could ensure “indivisible” security, and ongoing access to Britain’s defence and security capabilities – unmatched in Europe.

In a sharp letter to his German counterpart Heiko Maas, Mr Hunt warned that this was under threat because of a German halt on arms export licences to Saudi Arabia.