Deluge of appeals expected after predicted grades handed out in Scotland 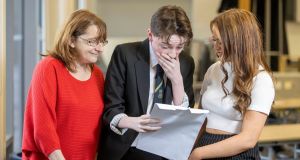 Dylan Quigley finding out his exam results with his sister Louise and mum Susan at Linwood High in Renfrewshire. Photograph: Jeff Holmes/JSHPIX/PA Wire

Scotland’s exams authority has been warned it will be deluged with appeals after it rejected nearly 124,000 recommendations from teachers for this year’s exam results.

The Scottish Qualifications Authority said it had downgraded nearly a quarter of all the recommended results for school pupils this year, after school exams were scrapped due to the coronavirus pandemic.

Even so, the SQA handed down a high number of passes this year, increasing the number of National 5 passes, which are equivalent to GCSEs, by nearly three points to 81.1 per cent and the number of Highers, roughly equivalent to A levels, by 4.1 points to 78.9 per cent. Last year, overall results fell for the fourth year running.

Partly reflecting the improved results, the Universities and Colleges Admissions Service (Ucas) said the number of Scottish pupils who won university and college places in Scotland had increased by 220 this year to 28,240, despite a fall in the number of 18-year-olds.

Schools were asked to predict exam results for Nationals, Highers and Advanced Highers based on a pupil’s past performance, but the SQA amended 133,000 entries, with only 7 per cent adjusted upwards. The vast majority were amended downwards by a full grade.

Iain Gray, Scottish Labour’s education spokesman and a former teacher, said its decisions were an insult to teachers and detrimental to students whose results were unfairly downgraded, hitting their chances of getting their preferred university place.

“Worst of all, the SQA have done this on the basis of each school’s past performance, marking the school, not the pupil ... they were told that this would be grossly unfair and it is. The SQA have also treated teachers’ professional judgment with contempt,” Mr Gray said.

“The SQA will now be deluged with appeals. I hope they are ready to deal with them properly.”

The SQA said the normal fees for lodging appeals, which last year cost £39.95 per result for fast-track appeals, had been waived this year in anticipation of an upsurge in challenges. The authority has also promised to process all appeals submitted by 14 August in time for Ucas to confirm final university places in September.

John Swinney, the Scottish education secretary, said that without the SQA adjusting grades, the number of passes based on school recommendations would have been far higher, up by 10.4 per cent for National 5s, 14 per cent for Highers and 13.4 per cent for Advanced Highers.

He congratulated students who had achieved their goals and commiserated with those who were disappointed. “This year has been exceptionally challenging but these robust processes mean we have upheld standards so that all learners can hold their heads up and move on to the next phase in their life, whether that be further study, employment or training,” he said.

“All exam systems rely on an essential process known as moderation to uphold standards. This ensures an A grade is the same in every part of the country, making the system fair for everyone, and across all years.”

There were complaints, too, about the SQA’s decision to cut Higher passes for pupils from the most deprived areas by over 15 points, from the 85.1 per cent pass rate recommended by teachers down to 69.9 per cent. By comparison, grades were cut in only 9.8 per cent of cases for the best off pupils.

The SQA said it felt teachers were overstating the likely passes for pupils of all backgrounds and it published data showing that in 2019, only 65.3 per cent of children from the 20 per cent most deprived areas got Highers, compared with 68.2 per cent in 2018.

SQA data also showed passes for children in the middle income band were cut by 11 points from the 88.2 per cent recommended by teachers to 77.3 per cent, compared with a 73.4 per cent pass rate in 2019.

Mr Gray said the cuts in grades for the poorest pupils were “shocking”. “The SQA and John Swinney were repeatedly told they should not mark pupils down on the basis of their school’s past performance, but they’ve done exactly that.”

Mr Swinney and Ucas said the results showed better results and increased university acceptances for pupils from the most deprived neighbourhoods, with the attainment gap between the most and least deprived narrowing.

Even so, social media feeds were crowded with teenagers and families complaining about their awards. Among them was Amna Salem, the Glaswegian writer and broadcaster, who tweeted that her younger brother had done worse than expected.

She wrote: “Got an absolutely defeated baby brother over here who did well in his prelims only to be completely shafted by the SQA who seem to be rounding down at least two bands across the board in what looks like a dedicated attempt to throw working-class kids under the bus.”