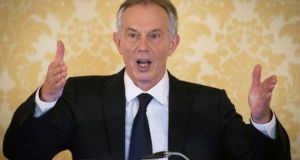 A mass testing regime is essential to avoid the need for another lockdown, Tony Blair has said. Photograph: Stefan Rousseau/Getty Images

A mass testing regime is essential to avoid the need for another lockdown, Tony Blair has said.

Without a vaccine or an effective treatment, mass testing is the only way to control the spread of Covid-19, the former UK prime minister said.

His comments come as researchers said the NHS Test and Trace programme needs to be scaled up in order to reopen schools safely.

A new modelling study has implied that reopening schools in September must be combined with a high-coverage test-trace-isolate strategy to avoid a second wave of Covid-19 later this year.

Meanwhile, Dr David Nabarro, the World Health Organisation’s special envoy on Covid-19, warned that if Test and Trace is “not done properly, then you get very bad surges occurring”.

Simon Clarke, UK minister for regional growth and local government, said the programme was “delivering” but “there’s always more to do”.

Mr Blair told Times Radio: “On some estimates 70 per cent of people with the disease are asymptomatic, so if you are only testing people with symptoms you are losing the majority of people from your testing strategy.

“From the very beginning, mass testing has been the only thing that gets you through this, avoids the severity of the very blunt instrument of lockdown and gets you to a place where you can more or less get your economy moving whilst containing the disease.”

He praised the UK government for increasing testing availability but said more needs to be done, including making sure the existing capacity is actually used.

His comments come as a scientist behind one of the rapid new Covid-19 tests – which promise results in 90 minutes – said that mass testing the public for Covid-19 could lead to the rest of society being able to reopen – including sports grounds and theatres.

Gordon Sanghera, chief executive of Oxford Nanopore Technologies, said that mass testing could lead to the introduction of health passports which would allow people who test negative for Covid-19 “access all areas”.

But David Nabarro warned that the virus “is not going away” and will “multiply, multiply and multiply”, given the chance.

“This virus is capable of surging back really quickly, and is actually doing so in most countries where there’s been success and getting it under control,” he told the Today programme.

“And as it surges back the way you stop outbreaks developing is through having well-functioning contact tracing linked to testing with isolating people who have got symptoms or who’ve been in contact.

“If we can do that and do it well, then the surges are kept really small. They’re dealt with quickly and life can go on.

“If on the other hand, the testing and tracing and isolation is not done properly then you get very bad surges occurring. And this will lead to economic challenges.”

Mr Clarke told Sky News: “I think it’s obviously vital that we always continue to keep up the progress that we’re making with Test and Trace, which is a massive national undertaking and it is working, I really would emphasise that.

“184,000 people so far have been contacted by the programme, either who’ve tested positive or their contacts, and those people have all been allowed to self isolate, removed from the community at a time when they could be at risk of spreading the virus.

“That’s obviously a massive success, we reach over 80 per cent of positive test results and contact over 75 per cent of their close contacts, so this is a programme which is delivering and which is helping to keep us all safer.

“There’s always more to do, we continue to work very hard to boost our testing capacity... we’re on track to deliver half a million by the end of October. But one thing is clear, schools are going to reopen in full in the autumn, that is not up for debate.”

The modelling study — which simulates various scenarios — examined the possible implications of schools reopening in the UK coupled with broader reopening of society, such as more parents returning to the workplace and increased socialising within the community.

The researchers from UCL and the London School of Hygiene and Tropical Medicine found that “with increased levels of testing... and effective contact tracing and isolation, an epidemic rebound might be prevented”.

But in a worst-case scenario, a second wave could be 2.3 times higher than the first, according to the study published in The Lancet Child And Adolescent Health.

The authors said that without appropriate levels of testing and contact tracing, reopening of schools together with gradual relaxing of the lockdown measures are “likely to induce a second wave that would peak in December 2020 if schools open full-time in September”.

Data published on Tuesday by the UK’s Office for National Statistics shows that 51,596 deaths involving Covid-19 had occurred in England and Wales up to July 24, and had been registered by August 1.

Together, these figures mean that so far 56,651 deaths have been registered in the UK where Covid-19 was mentioned on the death certificate, including suspected cases.

Meanwhile reports suggest a steep rise in the number of patients waiting for more than a year for NHS treatment.

Across London, 19,775 patients had been waiting more than 52 weeks by 19 July — compared to 1,154 across England less than 18 months ago, according to leaked data seen by The Independent.

Experts told the news site that increases of a similar scale are likely to be replicated across the UK after many hospital treatments were put on pause during the pandemic. – PA