‘This was like a nuclear bomb’: More than 2,700 injured in Beirut explosion

Lebanese rescue workers are digging through rubble looking for survivors of a powerful warehouse explosion that shook the capital Beirut, killing 100 people and injuring nearly 4,000 in a toll that officials expected to rise. Video: Reuters 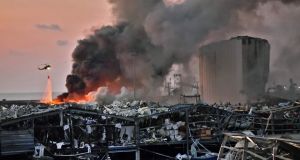 A helicopter puts out a fire at the scene of the explosion at the port of Lebanon’s capital Beirut. Photograph: Stringer/AFP via Getty Images 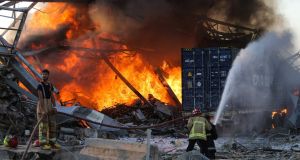 Firefighters try to put out a blaze at the scene of an explosion in Lebanon’s capital Beirut. Photograph: Stringer/AFP via Getty Images 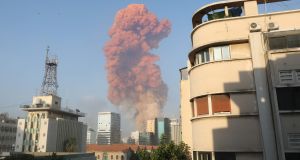 The scene of an explosion in Beirut on Tuesday. Photograph: Anwar Amro/AFP via Getty Images 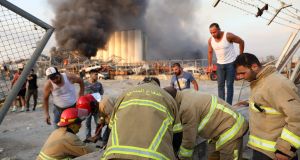 Firefighters work at the scene of an explosion in Beirut. Photograph: Anwar Amro/AFP via Getty Images 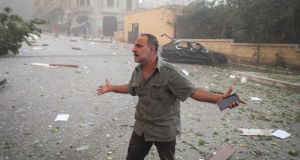 A resident stands in the street after the blast in Beirut. Photograph: Hasan Shaban/Bloomberg 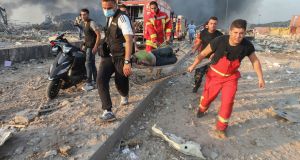 Firefighters carry an injured person from the scene in Beirut. Photograph: Hasan Shaban/Bloomberg 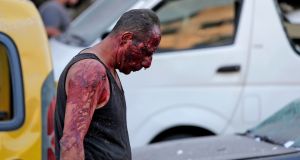 A wounded man at the port near the scene of the explosion in Beirut. Photograph: Anwar Amro/AFP via Getty Images

Hundreds of homes were left uninhabitable after the blasts ripped through a section of the Lebanese capital’s port.

Thousands of people sought treatment in nearby hospitals, which were struggling to cope with the casualties. Cars were left strewn across the surrounding highway, and the blast was heard up to 80km away in the country’s north. The health minister, Hamad Hassan said at least 2,700 were injured.

“God help us from all these catastrophes,” said Mamdouh (25) a caterer who lost his job in June. “If this was an accident, as they’re saying, it’s the worst you could ever imagine. This was like a nuclear bomb. What have we done to deserve this?”

Hours after the explosion, which took place at 6.05pm (4.05pm Irish time), the cause remained unclear. Israel denied responsibility and said it had offered humanitarian and medical aid.

Initial reports suggested that a fireworks warehouse was involved. The Lebanese security chief, Abbas Ibrahim, later blamed combustible chemicals stored in a warehouse. The interior minister, Muhammad Fahmi, said ammonium nitrate had been among the materials stored and called for an investigation into how it ignited.

US president Donald Trump cast the explosion as a possible attack and offered help.

“The United States stands ready to assist Lebanon,” said Mr Trump at a White House briefing. “We will be there to help. It looks like a terrible attack.”

When asked later about his depiction of the explosion, Mr Trump said that he had spoken with US military officials who think the blast seemed to be an attack, “a bomb of some kind”.

An explosion occurred this evening in the port area of Beirut in Lebanon. Please note that all IRISHPOLBATT personnel are safe and accounted for.

Video of the explosion at Beirut port caught from the sea#إنفجار_بيروت pic.twitter.com/ddDZQfBgzp

Lebanon’s prime minister, Hassan Diab, declared Wednesday a national day of mourning and vowed accountability for those responsible, claiming there had been warnings about hazardous material stored at the port going back to 2014.

So powerful was the force of the blast that it even rattled buildings in west and south Beirut. It happened three days before the verdict is due in an international tribunal trial of four men accused of blowing up a former Lebanese prime minister 15 years ago.

Any link to the tribunal result was quickly downplayed. Meanwhile, the Israeli government said its forces had not carried out an attack. “Israel has nothing to do with the incident,” an Israeli security official told Reuters on condition of anonymity. Israel’s foreign minister, Gabi Ashkenazi, told Israeli N12 television news that the explosion was most likely an accident caused by a fire.

The final death toll from the biggest explosion to ever rock Beirut is expected to be significantly higher than the figures given in its immediate aftermath.

A doctor at St George’s hospital, less than 2km from the blast, said injured people were being brought for treatment but the hospital had been destroyed. “They’re bringing people to the hospital but we can’t receive them,” he said. “They’re treating them outside in the street. The hospital is broken, the ER is broken.”

Videos shot by bystanders and posted on social media showed a smaller explosion with mini-blasts rippling through a warehouse, followed by an enormous secondary blast, which lifted cars from a nearby highway and ravaged a nearby overpass. There was devastating damage at the port and in nearby entertainment areas.

The Irish Embassy in Cairo advised any Irish citizens in Beirut who need assistance to contact the embassy. It said on Twitter: “We advise all citizens to shelter in place until they can move safely. We also advise the you follow the instructions of the Lebanese authorities.”

President Michael D Higgins said in a statement: “On behalf of the people of Ireland, may I extend deepest sympathies with the people of Beirut.

“Ireland and Lebanon have a longstanding relationship, which has included the presence of Irish troops on peacekeeping missions, and valuable relationships with villages and communities in Lebanon.

“The hearts of the Irish people are with the Lebanese people.”

The Irish Polish Battalion, a joint peacekeeping force in Lebanon, said all its personnel were safe and accounted for.

The destruction comes as Lebanon is grappling with an economic crisis that has slashed incomes and jobs and led to soaring nationwide poverty, and also amid rising tensions between Israel and Hizbullah along Lebanon’s southern border.

The impact of the blast, which was reminiscent of massive blasts during Lebanon’s civil war, was felt 200km away in Cyprus. “Everyone in Cyprus felt it,” said George, a resident of Larnaca. “The door was shaking in my house. In Larnaca they heard it and felt it . . . It was so loud we thought it happened here. My house was shaking.”

The office of the Daily Star newspaper, about a kilometre from the blast, was among the buildings to sustain damage from the explosion. Another newspaper, An-Nahar, which has headquarters opposite the port, said 15 of its staff were in hospital.

One woman covered in blood from the waist up walked down a ruined street, while on another street, a woman with a bloodied face staggered through traffic with two friends at her side.

“This country is cursed,” a young man passing by said. – Guardian/Reuters