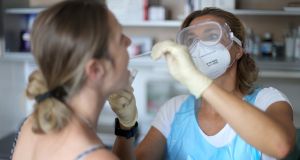 Europe is bracing for a renewed wave of coronavirus infections as authorities in Germany and France sound the alarm on Covid-19 and Spain recorded more than 8,500 new cases of the disease over the course of the weekend.

A second wave of Covid-19 is already under way in Germany and disregard of distancing rules by the public risks reversing the progress made in battling back the virus earlier this year, the head of the German doctors’ union said.

“This means that there is a danger that we will squander the success we have achieved so far in Germany.”

Her comments came as the latest figures showed confirmed coronavirus cases in Germany had increased by 879 to 211,281 and the death toll there had risen by eight to 9,156.

Across Europe, testing indicates an increasingly rapid spread of infection after authorities eased restrictions imposed in response to the Covid-19 pandemic, with a string of countries warning against travel to Spain as the country recorded 8,532 new coronavirus cases over the weekend.

The number of new confirmed infections in the Netherlands doubled to 2,588 over the past week compared with the week prior, despite a drop in the number of people who were tested. One-quarter of those infected were aged in their 20s, while half of those admitted to hospital in relation to Covid-19 were aged under 60.

In just in excess of half of new cases infection had been caught at home, according to the Dutch public health body RIVM, while most of the others “are the result of contact with other family members, friends, at parties, in the workplace or other leisure activities such as cafes, restaurants or sports clubs”.

Poland reported a record daily increase in infections for the fourth time in a week as the virus hit coal mines. Authorities there have blamed the surge on eased restrictions and working conditions where social distancing is difficult to enforce.

The country saw total infections rise by 680 in a day and six new deaths, as the government mulled introducing new restrictions to curb the virus, including mandatory testing on entering the country and quarantine for those arriving from high-risk places.

In France, the number of people in intensive care with Covid-19 rose after 16 weeks in which the figure was steadily dropping, and health authorities reported 29 additional deaths from the disease, bringing the total death toll there to 30,294.

A number of cities, including Lille, Nice and Toulouse, ordered people to wear face masks in busy outdoor public areas, with Paris considering following suit. The French scientific committee warned that the country was likely to see a surge of infections, and that this could occur within weeks if people do not follow distancing guidelines.

“It is highly likely that we will experience a second epidemic wave this autumn or winter,” the committee said in a statement released by the health ministry.

“The situation is precarious and we could at any moment tip into a scenario that is less under control, like in Spain.”

French president Emmanuel Macron left his summer residence of Bregançon on the Mediterranean coast to meet social workers in the nearby port city of Toulon.

“It’s important to continue to respect guidelines against kissing and shaking hands,” the president cautioned. “Wear masks, wash your hands with antibacterial gel, and be careful when the grandchildren come to visit, because the virus is still circulating in our country.”