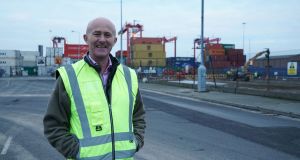 Eamonn O’Reilly, chief executive of Dublin Port. Mr O’Reilly says Dublin Port will be prepared for a hard-Brexit and customs posts will be functioning for the March 29th deadline. Photograph: Enda O’Dowd

Goods arriving at Dublin Port requiring physical checks after Brexit will be inspected in a warehouse formerly owned by businessman Harry Crosbie following an agreement signed by the State.

As part of contingency planning for the United Kingdom crashing out of the European Union without a deal next month, Dublin Port Company has signed a licensing agreement with the Office of Public Works to hand over use of a port-owned 13,000m warehouse on a five-acre site at the northeastern part of the port for Brexit-related checks.

The departure of the UK, the State’s closest trading partner, from the EU will lead to a huge increase in the number of UK imports requiring customs, health and safety clearance on their arrival into the port.

Eamonn O’Reilly, the port’s chief executive, confirmed it had licensed the property on Tolka Quay Road to the State, and that the OPW was fitting out the former Crosbie warehouse property and another seven-acre inspection area to be ready for Brexit-related checks after the UK’s departure on March 29th.

The port is spending €10 million on new booths and other infrastructure at a primary inspection area near the ferry terminals. From there, trucks will proceed to another inspection site on seven acres if they are carrying agri-food produce, and need to have their paperwork checked by veterinary or health inspectors.

Should the lorries require a physical inspection where their produce would be removed from containers or storage units, they will be directed to the former Crosbie warehouse where the goods can inspected.

“What’s within our control will be ready by March 29th,” Mr O’Reilly said.

A spokesman for the OPW said that sites for parking and inspection facilities along with physical examination facilities “will be in place in the event of a disorderly Brexit”.

He said the physical examination facilities would be operational and inspection facilities will be in place for Department of Agriculture, Health Service Executive and Revenue staff to conduct customs, health checks, and sanitary and phytosanitary, or animal health and disease checks.

The OPW has taken control of the facilities in Dublin Port as part of contingency planning to prepare for a no-deal Brexit under plans announced in December after the UK rejected the proposed EU divorce deal.

Mr Crosbie, whose father ran a haulage business in Dublin’s docklands, sold the warehouse to the port several years ago in a deal to reduce his debts to the National Asset Management Agency, which took over his property loans from the banks after the financial crash.

The warehouse was originally used as a chemical distribution depot by British company Imperial Chemical Industries (ICI) and then for the Henry A Crosbie haulage business, which held the contract to load kegs of Guinness on to ships from Dublin to Liverpool.

The site is surrounded by the sea on two sides and located near the ferry terminals. The Government is spending hundreds of millions of euro in preparation for a no-deal Brexit.