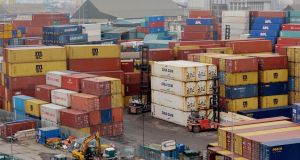 Dublin Port: to prepare for a no-deal Brexit, the State has to take control of more land for parking and checking. Photograph: Alan Betson

In a crisis comes opportunity, goes the saying, and Brexit could have thrown up a few opportunities for two businessmen in particular if the financial crisis had not tripped them up years earlier.

Had the 2008 economic crash not deprived them of what are now prime assets at a time of emergency, businessmen Harry Crosbie and Bill Cullen might have been among Brexit’s few winners.

One of Crosbie’s former warehouses at Dublin Port and Cullen’s one-time importation centre for Renault cars near Rosslare Europort have been chosen as emergency accommodation for the State’s physical checks of lorries and other HGVs if they are “red-routed” after their arrival on to land.

The potential logjam of traffic passing through the country’s ports after new customs and health inspections come into place on UK imports means that the State has, as an emergency measure to prepare for a no-deal Brexit, to take control of more land for parking and checking.

Minister of State for European Affairs Helen McEntee told the Oireachtas committee on European Union affairs on Wednesday that sites suitable for “temporary infrastructure” have been identified and “space for truck parking is being secured” at both Dublin Port and Rosslare.

Crosbie’s former 13,000sq m warehouse is ideally located; it is a dual-carriageway road away from the primary inspections that lorries will have to pass through after driving off ferries at the terminals. He sold the property, which sits on five acres, to the port as part of a plan with Nama to reduce his assets. The port has licensed the property to the State.

The Rosslare property – formerly owned by Cullen’s firm, Glencullen – but seized by a receiver when his business ran aground, covers 16 acres and has plenty of space for truck parking. In Cullen’s day, it could hold as many as 9,000 vehicles. The State is buying this property.

The site is not quite as convenient as Crosbie’s former warehouse as it is two kilometres from the port, so the State will have to devise a traffic plan to ensure trucks red-flagged for inspections do not take a wrong turn en route. Yet more Brexit planning to be done.