Covid-19: London's population 'fell by 700,000' amid exodus of foreign-born residents from UK 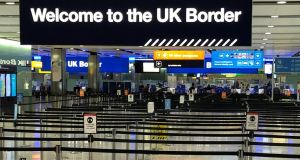 The departures are likely to be the largest fall in Britain’s population since the second World War, according to a statistical analysis of official data. Photograph: Ben Fathers/AFP via Getty

Coronavirus has sparked an exodus of immigrants from the UK and what is likely to be the largest fall in Britain’s population since the second World War, according to a statistical analysis of official data.

A blog, published on Thursday by the government-funded Economic Statistics Centre of Excellence (ESCoE), estimated that up to 1.3 million people born abroad left the UK between the third quarter of 2019 and the same period in 2020.

In London alone, almost 700,000 foreign-born residents have probably moved out, the authors of the blog calculated, leading to a potential 8 per cent drop in the capital’s population last year.

The study drew a clear link between the departure of so many foreign-born nationals and the high number of job losses in hard-hit sectors such as hospitality, which has typically relied on overseas workers.

“It seems that much of the burden of job losses during the pandemic has fallen on non-UK workers and that has manifested itself in return migration, rather than unemployment,” the authors concluded.

Large changes in regional populations would make it difficult for the NHS to distribute Covid-19 vaccines fairly around the UK and may raise questions over how business will fill jobs traditionally taken by European migrants.

The picture is further complicated by post-Brexit immigration rules. These mean that EU nationals who left the UK in the past year will need work visas to return and work in Britain. Those with settled status would be able to return to fill jobs, but new migrants would not.

The ESCoE’s calculations assume that official data, published by the Office for National Statistics, are flawed. The blog highlighted “hardly plausible” official statistics which showed employment of UK-born people in London rising during the pandemic.

With officials unable to collect data in the usual way at airports and other transport hubs owing to the pandemic, the ONS has faced severe difficulties in measuring migration numbers.

However, the agency has continued to measure employment trends during the pandemic through its labour force survey and has used this to form the basis of its regional population analysis.

Having found far fewer migrants to survey, especially in London, the ONS gave all the Londoners it surveyed much higher weights. This has resulted in the official figures showing the number of UK-born employed Londoners rising sharply.

The blog by the ESCoE noted that the official figures show that the number of employed people in London and born in the UK grew by more than 250,000 in the year to the third quarter of 2020 with the total UK-born population in the capital rising 440,000.

Yet the capital has been hit hardest by Covid-19 and has a high concentration of jobs in tourism, entertainment and hospitality, which have disappeared over the past year. The ONS figures showing a rise in British workers in London jobs did not remotely match other data such as benefit claimants in the capital or HM Revenue & Customs data from income tax records.

The authors of the study, Michael O’Connor and Jonathan Portes, said the only way to reconcile hard evidence of an employment crash in London with official figures suggesting a surge of UK-born employees was big problems in the ONS migration assumptions.

The ONS does not dispute the logic of the analysis and accepts anomalies being in its current estimates of employment and population. It blames these on difficulties of counting migration during the pandemic when its normal surveys have been suspended.

The agency added that it was working to transform its migration statistics and has promised an update early this year on its progress in improving them. – Copyright The Financial Times Limited 2021