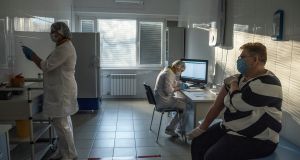 Kiev is seeking help from western allies to secure access to coronavirus vaccines, as pro-Moscow politicians in Ukraine press it to buy supplies from Russia despite the near seven-year conflict between the two states.

The Kremlin hailed Sputnik V as the world’s first registered coronavirus vaccine last August, when Russian regulators approved it before phase-three trials had even begun, and developers say it is more than 90 per cent effective and significantly cheaper than US rivals.

Moscow insists Sputnik V is safe, but international concern over its development is compounded in Ukraine by suspicion that the Kremlin wants to use the issue to discredit Kiev and its western allies as part of a “hybrid” conflict that began in 2014 when Russia occupied Crimea and fomented war in eastern Ukraine.

“Russia doesn’t care about the health of Ukrainians, it cares about imposing its propaganda cliches and ideology by means of supplying the vaccine,” he added. “One factor is much more important than the medical one from the point of view of Russia’s interests – the propaganda factor.”

Ukrainian president Volodymyr Zelenskiy urged the EU on Tuesday to give its eastern allies “increased attention ... in matters of joint procurement procedures and accelerating the supply of vaccines”.

He said last month that “this issue could be another geopolitical blow, it will be another strong information war on the part of Russia”.

Mr Medvedchuk – who chose Mr Putin to be his daughter’s godfather – announced this month that a Ukrainian firm was seeking state approval to make Sputnik V, and said a refusal would reveal the “criminal intention of the authorities to deprive Ukrainian citizens of the right to medical protection from coronavirus”.

Activists from Mr Medvedchuk’s party reportedly began collecting signatures this week for a petition urging the government to allow production of Sputnik V in Ukraine, where more than 1.1 million cases of Covid-19 and 20,376 deaths from the virus have been recorded.