Party grandee Armin Laschet is the frontrunner, but the outcome is far from clear 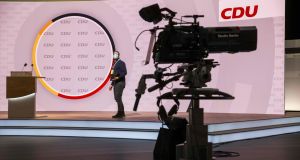 Preparations for the CDU’s digital conference in a hall at Berlin Messe fairgrounds. Photograph: Odd Andersen/Pool/AFP via Getty

Seven years ago chancellor Angela Merkel prompted amused sniggers online for suggesting the challenge of the digital age showed how “the internet is virgin territory for all of us”.

On Friday her ruling Christian Democratic Union (CDU) enters truly virgin territory when, due to Covid-19 restrictions, the party opens its first-ever digital conference in its third attempt to choose a new leader.

As head of Europe’s most influential party, the new CDU chairman elected by secret ballot on Saturday will inherit considerable power to shape the continent – but only by pivoting the party out of the 16-year Merkel era and into a new coalition.

With just eight months to election day – and with the influential incumbent casting her considerable shadow over daily political life – it’s no enviable task. No one has to tell that to Annegret Kramp-Karrenbauer.

To much fanfare in December 2018, the now 58-year-old inherited the party leadership from Merkel but struggled to fill her shoes. Gaffes and strategic missteps, on issues not always of her making, undermined Kramp-Karrenbauer’s authority inside the party faster than she could establish it. Heading to her last event as party leader, she admits to having no idea who will come after her.

The safe money is on the jovial party grandee Armin Laschet. He hopes his jovial, steady leadership of North Rhine-Westphalia, home to one in five Germans, will stand to him – and distract from his mixed record during the pandemic. He is the CDU continuity candidate, who has only warm words for Merkel.

“Her political style is pragmatic, not polarising,” he said this week. “In these tense times, our country needs a style of politics that is factual, solves problems calmly and thinks in a European fashion.”

That was a gentle swipe – this has been a very civilised leadership race – at Friedrich Merz, the other favourite in the race, a liberal conservative millionaire who polarises opinion like few others in German politics.

The 64-year-old was ousted by Merkel as her deputy leader in 2002, and is mocked by some as yesterday’s man. But he attracts Messiah-like enthusiasm from supporters, and at least a third of delegates voting on Saturday.

He has promised to keep the CDU in the political centre, where elections are won and lost, but believes a dose of “healthy patriotism” – at home and in Germany’s European politics – can win back neglected CDU conservative voters from the far right.

“I would like that all who think in a social, liberal and conservative way find a political home with us,” he says.

Party insiders expect the third leadership hopeful, CDU foreign policy expert Norbert Röttgen, to finish third when 1,001 party delegates from 16 state parties cast their votes. Laschet is expected to get most of his transfers.

“We simply don’t know how this will end,” sighs a leading CDU politician, for whom anonymity is the price for his honesty. “All candidates will be speaking into a black hole in the studio, to a public at home. No one knows how this will play out. But one thing hasn’t changed: the DNA of our party is to govern.”

Achieving that – swapping the current grand coalition with the Social Democratic Party (SPD) for a possible alliance with the Greens – is one of three huge challenges facing any new CDU leader.

The second is how, in an election year, to sharpen the CDU’s political identity, long neglected thanks to Merkel’s personal popularity and political pragmatism.

“This secured power for the CDU but also led to it losing its political substance,” says Prof Andreas Rödder, a political scientist and historian at the University of Mainz.

“Europe needs a strategy, Germany needs an economic direction, particularly after the pandemic, and the CDU needs a broader political profile.”

That, in turn, leads to the third challenge: around Easter, the new CDU leader must decide whether to seek the chancellor post in September’s federal election or cede the stage to other hopefuls.

Bavarian premier Markus Söder is head of the Christian Social Union (CSU), the CDU’s sister party, and is determined to succeed as Germany’s first Bavarian chancellor.

No less ambitious is Merkel’s health minister, Jens Spahn. Ostensibly Laschet’s wing man, the 40-year-old hopes his steady pandemic performance, and Laschet’s weaker standing in polls, will convince the older man to let him – a friend of Leo Varadkar and Austria’s Sebastian Kurz – run for chancellor.

This week, asked if he might even pop up in the second round of Saturday’s CDU leadership vote, Spahn made a poor job of hiding his burning ambition: “As of today, I can rule that out.”