‘Without tourists, I have nothing this year’

Greece Letter: Locals desperate for visitors are afraid tourists may carry virus they have avoided 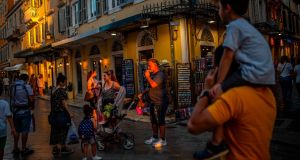 The alleys in the old town of Corfu. Ireland has been in a grey area as far as eligibility to travel to Greece is concerned. Photograph: Angelos Tzortzinis/AFP via Getty Images

There should be three channels for arrivals at Greek airports: black, white and grey. Irish arrivals should join the grey queue.

As Greece opens its airports to flights from all EU countries and others where Covid-19 infection is relatively low – but not the US, Russia or the UK – there is ambiguity about the status of arrivals from Ireland, the first of whom touched down in Athens on a Ryanair flight on July 1st.

Greece originally designated 29 countries as relatively “safe” – but Ireland was not among them. Since then, Ireland has been in a grey area as far as eligibility to travel to Greece is concerned. On June 30th, 14 further countries were added to the “safe” list. Once again, Ireland was not included.

But this does not necessarily mean that Ireland is excluded, since the Greek government on June 30th specifically listed Ireland as an approved country of origin. But this was complicated further on the same day by the EU’s exclusion of Ireland as a “safe” destination for travel within the EU.

Moreover, the Department of Foreign Affairs advises against all non-essential travel overseas until further notice. While this is causing some debate in Ireland, intending passengers find themselves in a very strange situation where they have to consult their conscience, rather than their bank balance, in deciding whether to take a holiday abroad.

One can well understand the anxiety: on the Greek side, what level of infection is likely to come into the country? On the Irish side, will returning holidaymakers bring the infection with them? The Irish Embassy in Greece has drawn attention to the implications for travel insurance, since some policies become invalid if someone chooses to travel contrary to Irish Government advice. You also face a possible 14-day quarantine on return.

The most worrying aspect is that most of the Greek islands have virtually escaped the virus, yet these are the areas opened up for tourists: having survived the lockdown, we are faced not only with the aftermath of disorientation and disruption of “normal” life, but the high (as some see it) risk of infection from travellers.

This cause for concern is highlighted by one sombre fact: on June 1st, a Qatar Airways flight from Doha landed at Athens. Twelve out of 91 passengers tested positive for coronavirus. As a result, Greece announced the suspension of flights to and from Qatar. But, on June 3rd Qatar Airways stated that all passengers on that flight had tested negative: “Before boarding the flight to Athens, all passengers were tested and were found fit to continue their journey,” the airline stated.

The question thus arises: how could a test in Doha prove negative, while on arrival in Athens more than 12 per cent of the passengers tested positive? Is there a discrepancy in standards being applied? Is the statement “found fit to continue” compatible with “testing negative”? Either someone is being economical with the truth, or there is no “truth” on which we can rely.

As it prepared to open the ports and airports, the Greek government explicitly stated on June 30th: “We are ready to receive tourists without making any compromises with regard to public health.” An hour after this, it was announced that legislation would be introduced to rigorously clamp down on any spike in infections threatening Greece; the terms indicate an even stronger level of lockdown than we had from March to June.

All passengers to Greece are now required to complete a passenger location form (detailing the destination in Greece, contact details and home details) 24 hours before check-in, (available at travel.gov.gr/#/).

The bottom line is that every country is distrustful of every other. Greece fears infection carried by Irish tourists as much as Ireland fears that its tourists may bring in the virus on their return from holiday.

If you decide to travel to Greece, what can you expect? A tourist industry determined to make the most of the remaining season, but operating sotto voce and with strict health regulations, and a general public seriously afraid that you may be carrying a virus that so far they have avoided.

It’s reckoned that, at best, Greece will earn less than a third of its usual income from tourism. But the cost to the exchequer of sustaining the national economy is far greater, both now and in the long term, from the knock-on effects of recession.

A cafe owner expressed his desperation to me: “Without tourists, I have nothing this year.” I ask him: “Would you rather be bankrupt or dead?” His reply is salutary: “Sometimes these words mean the same thing.” Such is the level of despair and frustration at a situation that is out of the hands of the politicians, the banks and even the medical services.