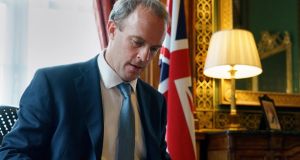 Moscow’s Gamaleya Institute said this week that, after a human trial of its potential coronavirus vaccine showed it to be safe, it hopes to test it on a small sample from the general population next month. Only two of the 19 potential vaccines in development around the world have already entered phase three trials on a large group of volunteers, one by China’s Sinopharm and another by AstraZeneca and the University of Oxford.

On Thursday, Britain’s cybersecurity agency said Russian state-backed hackers had targeted a small number of research facilities involved in developing a coronavirus vaccine. The Oxford group, led by Sarah Gilbert, is understood to be among the targets, along with Imperial College London and universities and pharmaceutical companies in the United States and Canada.

Russia denied the allegation but Sergey Markov, a former United Russia MP who was once Vladimir Putin’s spokesman, told Times Radio on Thursday that he thought Moscow might have hacked the British vaccine programme but that they were right to do so.

“I think it’s quite legitimate,” he said. “Every nation has an intelligence service. Their work is illegal, but legitimate anyway. We understand that contradiction. Yes, it’s a contradiction. But this contradiction was about many issues; it’s one of the most important interrogations. And scientists should work but nevertheless, they work illegally in other countries. It’s normal.”

The allegation that APT29, the same group that hacked Democratic Party emails ahead of the 2016 US presidential election, was stealing knowledge about the vaccine shocked Westminster. But a second allegation about Russian interference in Britain’s affairs, made separately in a ministerial statement by foreign secretary Dominic Raab, raised as many questions as it answered.

Raab said “Russian actors” sought to interfere with last December’s general election “through the online amplification of illicitly acquired and leaked government documents”. The documents about trade negotiations with the US appeared on social media site Reddit and were later used by Labour as evidence that the Conservatives were willing to allow private health companies to take over parts of the National Health Service as part of a trade deal.

Raab said there was a criminal investigation into the source of the leak but his choice of language was curious, focusing on its “amplification” rather than on the leak itself.

“The UK will continue to call out and respond to malign activity, including any attempts to interfere in our democratic processes, alongside our international partners. We fully support the recent action taken by our German partners who exposed Russian responsibility for the hack of their parliament in 2015 as well as their intention to act against those responsible under the cyber-sanctions regime,” he said.

Suspicious minds at Westminster wondered about the timing of Raab’s statement, not least because Sky News defence and security correspondent Alistair Bunkall reported that an independent investigation had linked the December leak to a Russian operation called Secondary Infektion. The operation, which started six years ago, targeted countries in Europe and North America with fake stories apparently aimed at discrediting Russia’s perceived enemies abroad and creating divisions between them.

Raab’s statement came shortly after the newly formed Intelligence and Security Committee at Westminster announced that it would publish its long-delayed Russia report next week. The report focuses on Russian interference in the 2016 Brexit referendum and the 2017 general election and is expected to include some material embarrassing to the Conservatives.

By suggesting that Labour benefited from Russian hacking, Raab has muddied the waters ahead of next week’s report. Thursday’s allegations also helped to distract from the government’s latest embarrassment in failing to get former minister Chris Grayling elected chairman of the committee.

The committee has a majority of five Conservatives to four others, and Grayling was such a shoo-in that he didn’t bother canvassing for votes. But Labour and SNP MPs on the committee agreed with veteran Conservative Julian Lewis, a former defence committee chairman, that if he nominated himself for the position they would support him.

Downing Street reacted to Lewis’s election by expelling him from the Conservative parliamentary party, claiming that he had promised the chief whip he would back Grayling. Now freer to speak his mind than before, Lewis wasted no time in telling the world that No 10 was lying.