Total number of deaths from virus now at 1,749, as NPHET warns of rising R-number

The country is in a “position of high uncertainty at the moment” as the R-number, or the reproductive rate of the virus, has increased above 1 to potentially as high as 1.8, acting Chief Medical Officer Dr Ronan Glynn has warned. 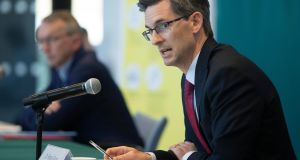 Dr Ronan Glynn, acting chief medical officer, said a decision on reopening pubs on August 10th would only be made in the week beforehand, and based on the number of cases at the time. Photograph: Colin Keegan/ Collins

The country is in a “position of high uncertainty at the moment” as the R-number, or the reproductive rate of the virus, has increased above 1 to potentially as high as 1.8, acting Chief Medical Officer Dr Ronan Glynn has warned.

He made his comments at a briefing from the National Public Health Emergency Team (NPHET) where Professor Philip Nolan, chairman of the NPHET Irish Epidemiological Modelling Advisory Group, said based on modelling, an R-rate of 1.8 could see over 150 cases a day by August 10th.

Such a scenario would “obviously have very, very negative impacts on our plans to get our children back to school”, Dr Glynn said.

“It is not surprising that the reproduction number has increased given we eased measures.”

Dr Glynn said a decision on reopening pubs on August 10th would only be made in the week beforehand, and based on the number of cases at the time.

He added it was “very difficult to see a nightclub open in the context of where we are at with this disease in Ireland and internationally any time soon”.

Asked about travellers coming to Ireland, he said it was not the “dominant issue” in the spread of Covid-19 here.

“The vast majority of cases here involve contact between people here,” he said.

“So it is up to us in this country to control the spread of this disease.”

Dr Glynn warned that the cases NPHET will report next week “have already been seeded”.

“However, we have the power to limit the spread and impact of this disease beyond that; the way we do so is through following public health advice, avoiding high-risk situations and encouraging our friends and family to do the same.”

Prof Nolan said the best estimate for the R-number - the rate at which the virus reproduces - stands at 1.4, but could be as high as 1.8.

“We have the opportunity now to maintain suppression of the virus,” he said. He said we are in quite a “precarious situation” as to where the virus will track over the next few weeks, given the R number is above 1.

The North’s Department of Health reported no new coronavirus deaths in its daily bulletin issued on Thursday afternoon, leaving the Northern Ireland death toll at 556.

It recorded 16 new cases of Covid-19, bringing the total of confirmed cases to 5,815. So far 124,190 people have been tested for the virus in Northern Ireland.

A further 745 redundancies were proposed in the first two weeks of July. Companies in Northern Ireland are required to issue notifications when they plan to make more than 20 people redundant.

The total number of proposed redundancies since the start of March, taking in much of the period of Covid-19, was 4,900. These were in four main sectors: transport and storage, wholesale and retail trade, food and accommodation services, and manufacturing, according to the latest figures from the Northern Ireland Statistics and Research Agency (Nisra).

Nisra also reported that almost 7,000 redundancies were proposed in the twelve months to the end of June, more than double the number recorded in the previous twelve months.

The North’s health Minister Robin Swann is to propose to the Northern Executive that it introduce compulsory mask-wearing in Northern Ireland.

Face coverings will be compulsory in shops in England from July 24th while they are already mandatory in Scotland.

The Executive, which currently is reviewing the situation on masks, will consider the matter when it meets next week.

The SDLP infrastructure Minister Nichola Mallon had recommended face-coverings in shops while Mr Swann said he will table such a proposal to the Executive.

“I have no wish to preempt Executive decisions, but I am firmly of the view that everything possible must be done to encourage the wearing of face coverings in retail stores and other indoor spaces where people are not eating, drinking or exercising,” said Mr Swann.

He said the North’s chief medical officer Dr Michael McBride and chief scientific adviser Professor Ian Young supported his recommendation. “It is also the case that making it mandatory would provide clarity and reassurance for members of the public,” he said.

“We need to promote every available measure to stop the spread of Covid-19, both now and into the autumn and winter, given the risk of further waves of infection. Wearing face coverings in enclosed spaces will have to become second nature if we are to keep each other safe.”

Meanwhile, the North’s Public Health (PHA) agency said it has identified a “cluster” of Covid-19 cases in the Limavady area of Co Derry.

The agency said it is linking them to a social gathering in a private or residential setting.

Testing and contact tracing are being carried out to identify anyone who may be potentially affected and to help prevent any further spread, said the PHA.

According to the Department of Health’s figures nine of the 16 new cases confirmed on Thursday are in the Causeway Coast and Glens Council area which includes Limavady.