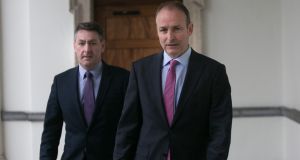 Fianna Fáil MEP Billy Kelleher has said he should have followed HSE advice and remained at home for the election of Micheál Martin as Taoiseach in the Convention Centre in Dublin last weekend.

Mr Kelleher travelled to Dublin from Brussels last Friday and attended the election on Saturday. Public health advice for people arriving into the State from overseas is to self-isolate for 14 days.

“As I previously stated, I avail of Covid-19 testing services before in advance of departing Brussels in order to reduce any potential public health risk,” Mr Kelleher said in a statement on Sunday.

“However, despite this, I accept that the risk could not have been eliminated fully and I should have followed HSE advice and remained at home. This was an error of judgment on my part and I apologise unreservedly.”

Minister for Public Expenditure and Reform Michael McGrath said earlier on Sunday that the guidelines in relation to self-isolating “apply to everyone”, including public representatives.

“Elected representatives are essential workers and have been from the beginning but the requirements and the guidelines indeed in relation to self-isolation having returned from abroad apply to everybody,” Mr McGrath told RTÉ’s This Week programme on Sunday.

“I think it is really important that all of us who are in positions of leadership that are elected to office, that we uphold the guidelines that are there. We have all spent a lot of time informing the public of what we expect of them and so I think they expect us to do the same.”

Separately, the Minister said the wage subsidy scheme, which is supporting more than 400,000 workers, “won’t be there forever” but would not come to “an abrupt end” at the end of August.

“It is a costly scheme but there are costs to not continuing it as well. I think this would not be the appropriate time to end the scheme. It will be continued,” Mr McGrath said.

The Fianna Fáil TD said he and the Minister for Finance Paschal Donohoe were “in discussions” with their Government colleagues as to the future of the scheme.

Both Ministers will bring forward recommendations on changes to the scheme to the Cabinet committee on economic recovery and then Cabinet will make a final decision on the programme.

In terms of the pandemic unemployment payment, Mr McGrath also said “it will not remain in place forever”.

A stimulus package to boost the economy following Covid-19 restrictions is due to be published by the Government this month.

The Minister also said the Taoiseach had some “incredibly difficult choices” to make in selecting his ministerial team as did Tánaiste Leo Varadkar and Green Party leader Eamon Ryan.

“The truth of the matter is there is lots of talent within the respective political parties. It is perfectly understandable and natural that people will be very disappointed. There simply were not enough places to go round,” Mr McGrath said.