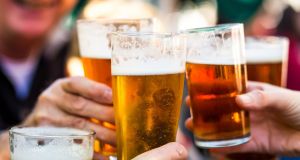 Emergency legislation should be fast-tracked giving gardaí extra powers to close down businesses responsible for selling alcohol to on-street drinkers, the Restaurants Association of Ireland has said.

The association made the call on the Ministers for Health and Justice, saying it was needed to prevent a resurgence of coronavirus infections and after large crowds gathered on some streets this weekend.

Adrian Cummins, chief executive of the association, said the scenes captured on video and posted on social media over the weekend showing crowds of drinkers ignoring physical distancing outside pubs in Dublin city centre “must stop.”

“On-street drinking needs to cease as quickly as possible and the Garda needs to be given extra powers. The guidelines are not the law,” he said.

“Gardaí objecting to the licences is well and good in September but if there is a second wave in three weeks’ time, that doesn’t make a blind bit of difference. We need to get control of this quickly.”

Mr Cummins expressed fears that the hospitality industry might be closed down as a result of this behaviour if it contributes to an increase in Covid-19 infections in the coming weeks.

Many of his members, which include gastropubs and cafes, were furious that some businesses were jeopardising the hospitality sector when restaurants had spent large sums of money investing in protective equipment and training for staff so that they could open safely for customers, he said.

”For those that have done the right thing over the last seven days, who prepared and got their staff trained and made their businesses, it is absolutely, totally wrong,” he said.

Earlier, the Licensed Vintners Association (LVA) said the lack of social distancing in large crowds socialising over the weekend on Dame Lane in Dublin city centre presented an “ugly image” for the capital.

Gardai walking around the streets in Dublin City Centre to make sure pubs are not breaking the guidelines on social distancing, serving food or time limits etc

Yet this is allowed on Dame Lane..... pic.twitter.com/4inEgsY2Rm

The problem was “separate” to the reopening of pubs that can operate as restaurants, and related to “street drinking,” Donall O’Keeffe, LVA chief executive said.

It comes as publicans risk the immediate closure of their pubs and losing their liquor licences if they are found breaching Covid-19 public health measures during new inspections on pubs.

Garda Headquarters in Phoenix Park, Dublin said it had instructed gardaí across the country to begin inspections in pubs from 7pm to ensure they were adhering to the public health measures – a significant ramping-up of the approach that had been planned.

During the coronavirus lockdown Dame Lane has been a spot for impromptu street parties, but the problem was “getting worse,” Mr O’Keeffe said.

People were gathering with alcohol purchased from some pubs operating a “takeaway” service, and nearby supermarkets, he said.

“Nobody is social distancing, there are no toilet facilities, it is a terrible image for the city centre and for the trade,” he said.

In a statement posted on its Facebook page, The Stag’s Head, one of the pubs in the Dame Lane area said it “would like to reaffirm that we have remained closed since the 15th of March.”

The pub said it looked forward to reopening on July 20th, and it “will be following all social distancing protocol for the safety of our staff and patrons.”

Pubs are permitted to reopen on July 20th, however following lobbying from the industry premises that can operate as restaurants could resume trading earlier from June 29th.

There are strict guidelines in place for pubs that have reopened, in order to prevent the spread of Covid-19. Customers must be served a substantial meal costing at least €9, with time limits of 105 minutes per group, and table service only.

Pygmalion, a popular cocktail bar and restaurant on South William Street, was involved in a controversy over lack of social distancing in a queue into the premises last weekend.

Video footage shared on social media showed a uniformed garda telling a staff member “absolutely nobody is social distancing in this line” and “you can’t control the line, you close up, simple as that”.

Commenting in recent days Paul McGlade jnr, owner of Pygmalion, said “we are trying our best but obviously we can do better. We had markings [on the ground] to respect social distancing and extra security guards.”

This brings to 1,741 the total number of deaths related to the disease in the Republic.

Nphet also reported a further 11 new cases of the disease, bringing the total number of confirmed cases here to 25,509